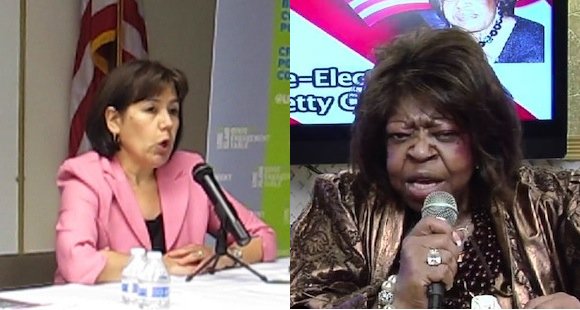 King last month ordered Cross to step down as he weighed the merits of the vote after challenger Maribel Touré accused Cross and her supporters of fraud, coercion and abuse of the absentee balloting process. His decision came just 11 weeks after he was petitioned to weigh in; it could have taken some eight months.

King, in his decision, called for a special election to fill the vacancy and ruled that the district must comply with monitors he will select to oversee the vote. The term of the at-large board seat expires June 30, 2015.

School board president Lamont Johnson said he did not know when the election would be held, but it would be “hopefully as soon as possible.”

The announcement was met with mixed emotions. Activists were happy that the Cross’s election had been invalidated, but they were frustrated that a whole new election was needed, and that Cross would be allowed to run again.

Hempstead is one of Nassau County’s largest communities of color. But while Latinos comprise 59 percent of the population, none has ever held a seat on the school board, and few hold administrative positions within the district.

Touré would have been the first Latino to sit on the school board. But her win on election night May 20 was upset the next day when Cross appeared with suspect absentee ballots that put her six votes ahead.

King ruled that the disproportionate number of absentee ballots cast for a single candidate, as well as the handling of those ballots was “highly suspect.”

News 12 reported that the special election must be held within the next 45 days.

In addition to the election, residents are also waiting to see if criminal charges will be filed. Nassau District Attorney Kathleen Rice has been investigating the election for several months now, though the status of the investigation is unknown. “What we now need is for the district attorney . . . to step up and tell us who is going to jail,” Sergio Argueta, an activist with The Corridor Counts, told Newsday.