This evening at 7 there will be a groundbreaking political dialogue on Long Island: The candidates for Suffolk County executive will meet to talk about how to strengthen our diverse communities, fielding questions from residents representing a wide range of community groups.

Long Island is famous for many things: its beaches, its pizza and its family-friendly lifestyle. It’s also famous for less savory reasons, like the historic segregation that still factors prominently into most of our lives: black neighborhoods, white neighborhoods, Latino neighborhoods, and the inequalities and tensions that come with them. The 2008 killing of Marcelo Lucero, an Ecuadorean immigrant, brought these tensions into stark relief.

For far too long, politicians have ignored the range of diverse voices on Long Island, but it’s time for that to change. According to 2010 census data, about one of every four Suffolk County residents is Latino or African-American. It’s time for communities of color to make our voices heard, and this debate represents an opportunity to do that.

The debate is being organized by the Long Island Civic Engagement Table, a new nonpartisan initiative to promote civic participation; Long Island Wins, an organization focused on immigration issues; and Noticia, the Spanish-language weekly newspaper I own and publish. In many ways, my family’s story and that of Noticia are directly related to the growing diversity on Long Island. 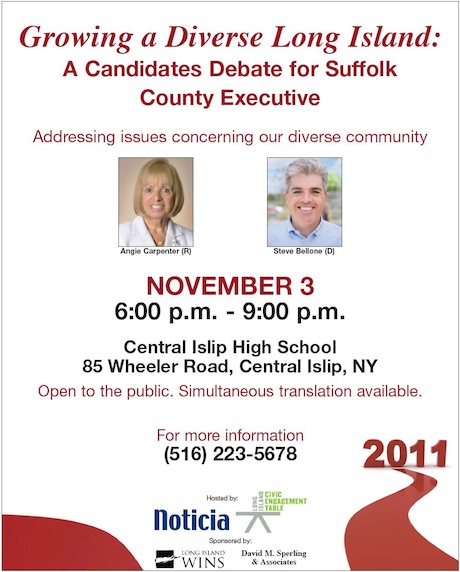 When my family immigrated legally to the United States from Peru in 1989, my parents struggled to find their professional niche. Like many other immigrants, they faced language barriers and did not fully understand Long Island’s complex system of local government.

Despite the challenges of acclimating to a new country, they held fast to their goal of achieving the American dream. Back home in Peru, they had worked in the media, and they saw a need for more Spanish-language news on Long Island. So they launched Noticia in 1991 from their one-bedroom apartment in Hempstead. In 2009, my sister and I took control of the paper, which had become a vital voice for my community on Long Island.

I had worked in local government and with not-for-profit organizations, so I’d witnessed the struggles of communities of color and the lesser resources being allocated to those communities. I knew that Noticia alone wouldn’t be able to change the world, but it could help push for social justice here at home.

This evening’s debate is the clearest expression of that mission thus far. At bottom, democracy is about citizens electing their representatives and holding them accountable for defending the interests of their communities. For too long in Suffolk’s communities of color, there has been a vicious cycle of disengagement and low accountability: Voters remain detached because representatives neglect their needs, and representatives continue neglecting their needs because voters are inactive. The clearest evidence of this disengagement is that voter turnout among African-Americans and Latinos in Suffolk consistently pales in comparison to that of their white counterparts.

This debate represents a first step toward breaking the cycle. By putting the candidates for county executive face to face with members of Suffolk’s diverse communities—including representatives of groups like the NAACP, the Long Island Immigrant Alliance and the Long Island Hispanic Chamber of Commerce—we will demonstrate the power of the democratic ideals of participation and truly representative government. It’s time to begin a new chapter in the political life of our communities.

Silvana Diaz is publisher of the Long Island Spanish-language newspaper Noticia, which is co-hosting a county executive debate at 7 tonight at Central Islip High School with the Long Island Civic Engagement Table and Long Island Wins.