Last night was the bilingual candidates’ forum for Suffolk’s Senate District 4. The event was sponsored by Long Island Wins, Long Island Civic Engagement Table, and Noticia. It was attended by nearly 150 people.

The first questioner asked if the candidates supported raising the minimum wage from $7.25 to $8.50 per hour. Assemblyman Boyle said:

My answer is not as complicated. I support the bill before the Assembly and the Senate. Understand that minimum wage workers have lost 40% of their purchasing power since 1970 while corporate salaries have gone up 289%. There is a huge gap between the rich and the poor and we’re losing the middle class.

The candidates were then asked where they stood on the New York State DREAM Act.

I think everybody knows where I’ve stood on issues dealing with immigration and the rhetoric coming from county government on immigration. My record on that is well known. With respect to the DREAM Act, President Obama resolved the issue by giving those DREAMers, those students that want to go to college, special status so they can move forward and get an education, kids that were brought here by their parents when they were young and were raised here…. The DREAM Fund Act I support fully. The other immigration issues have to be dealt with at the Federal level.

In terms of the DREAM Act, I certainly do not want to punish any children brought here by their parents… I have problems with certain provisions of the DREAM Act particularly saying that students shall be residents of the school where they matriculate. I have a problem with that. As far as the DREAM Fund Act, I supported it. I worked for it. I advocated for it. I will do so as well as part of the New York State Senate.

The candidates were also asked about the Secure Communities program.

The Secure Communities program is frowned upon by the governor. I believe that Suffolk county is leading the state in terms of arresting people and having those people arrested for minor infractions being held and sent to deportation centers for minor infractions. Many times the victims of this program are not the hardened criminals. We have to put the resources into fighting violent and serious crime, not into people who are simply working for a living.

I agree to a certain extent. This program was intended for more serious crimes, not for minor offenses for which people would be sent back to their countries. I do not think Albany should have a one-size fits all approach to Secure Communities. Let the localities decide whether they want to participate. I would not mandate that from Albany, but let the localities decide.

Questioners also asked about issues ranging from sexuality education in the schools, discrimination against the LGBT community, and union jobs, to Head Start. 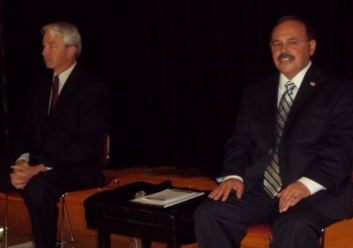