Several hundred Nassau County residents attended a hearing in Mineola today on the privatization of county bus service, with the overwhelming majority expressing deep concerns about diminished service under the new system.

On January 1, the county is set to hand over control of local buses to Veolia, an international transportation company, but the deal must still be approved by the Nassau County Legislature and the Nassau Interim Finance Authority. The legislature will likely vote on the contract on December 19, Newsday reports.

After a long wait for a public hearing—advocates requested one back in June—the crowd took the opportunity to make their voices heard. A diverse cross-section of Long Islanders, including representatives from immigrant communities, devoted an afternoon and evening to the cause.

“Everybody’s worried,” said Angela Pacova, a Peruvian immigrant and Levittown resident who works as an MTA bus operator. “We don’t know if they’re going to have cuts…They’re playing with our lives.” 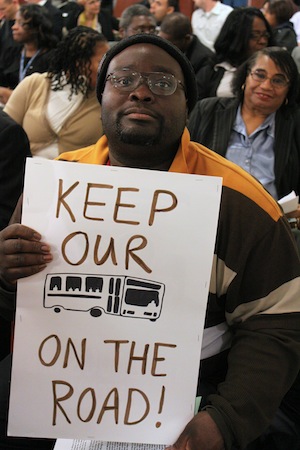 The frustration among those in attendance was evident. After an extended recess by legislators delayed the start of the hearing by 90 minutes, the crowd grew rowdy, booing Nassau County Executive Ed Mangano when he eventually appeared to kick things off, and demanding that he face residents and not the legislators when speaking.

When a consultant for the county, Mark Aesch, took to the podium to explain why Nassau opted for privatization, he was met with vocal opposition:

Among those at the hearing was 66-year-old José Marinero, a maintenance worker who lives in Uniondale and is a member of the Long Island Civic Participation Project. Marinero immigrated to Long Island from El Salvador two decades ago, and relied on the bus for his first 11 years in the country. 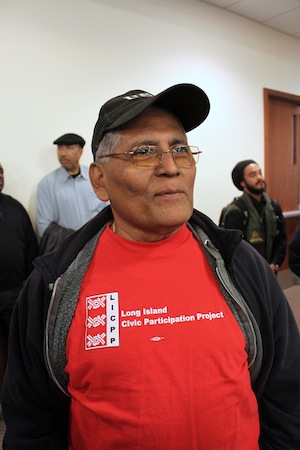 While he now owns a car, he came out to support fellow residents who depend on public transportation. “Almost everyone in my community uses the bus,” he said.

Video and photos by Ted Hesson.