The Long Island Immigrant Alliance held a rally outside the Suffolk Legislature to commemorate the killing of Marcelo Lucero three years ago and to call for making Suffolk a Hate Free Zone. 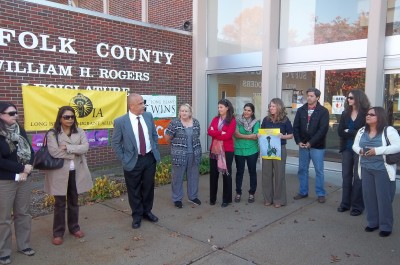 Michele Lynch of Local 1199 said that the immigrants rights community is relying on newly elected County Executive Steve Bellone to keep his promises to counter hatred in Suffolk and to include immigrants in government.

Legislators Rick Montano and Vivian Viloria also spoke. They urged the rally participants to take advantage of the change of attitudes among voters in Suffolk to hold elected officials accountable to the county’s 200,000 immigrants. 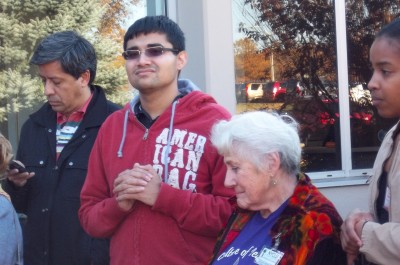 Sonia Palacio of the National Association of Puerto Rican and Hispanic Social Workers said that the new administration should explore creating day laborer hiring sites. A site for Farmingville had been approved by the County Legislature but was later vetoed.

Kevin Nelson of New York Communities for Change said that the county needs to enhance opportunities for immigrant to start small businesses. He said that hate crimes in Suffolk devalued the contributions immigrants make to the local economy.

Ruth Silverman said that while anti-immigrant hatred was no longer likely to spew from the Suffolk County Executive’s office, Congressman Peter King continues to try to rouse anger against Muslim immigrants. She, and several other speakers, stressed the importance of immigrants from all regions of the world condemning politicians who target Muslims.

Daniel Altscuhler of the Long Island Civic Engagement Table reminded the participants that “today is the first day of the post-Levy era”. He said that rising immigrant voter participation in Tuesday’s election served notice that immigrants could no longer be taken for granted or scapegoated. 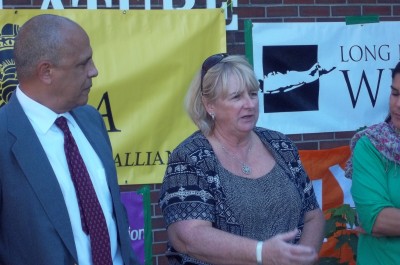