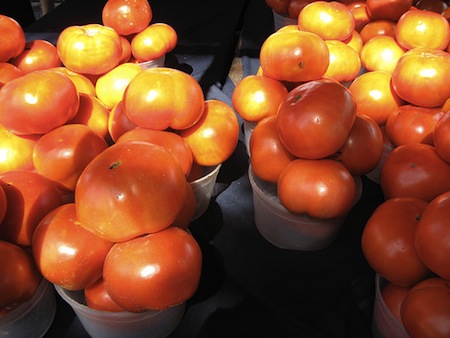 This coming Saturday, September 24, activists from all over the Northeast will gather in Brooklyn for a Fair Food Festival aimed at pressuring Trader Joe’s to sign an agreement with the Coalition of Immokalee Workers (CIW).

The CIW is a membership-led farmworker organization based in Southwest Florida working to increase wages and improve working conditions in the tomato fields. The Campaign for Fair Food—one of the most successful organizing campaigns in the country—is currently pressuring several supermarkets to sign an agreement, including the foodie favorite, Trader Joe’s.

Burger King, McDonalds, Subway, Taco Bell, Whole Foods, and several other corporate giants have already signed on with the CIW in order to:

—Ensure that growers pay 1 penny more per pound of tomatoes they pick and that this penny is passed down directly to farmworkers.

—Work together with the CIW to establish and implement a code of conduct in their supply chains.

But Trader Joe’s has lower standards in its fields than the largest fast food chains and food suppliers, and sells its products under a guise of sustainability.

All across the country, Fair Food activists have been urging Trader Joe’s to do the right thing and ensure that their tomatoes are picked by workers who earn a decent wage and work in humane conditions. Trader Joe’s continual refusal to sign onto such an agreement has disgusted customers nationwide, leading many to criticize Trader Joe’s usage of the so-called Walmart model of low prices and low wages.

The Community/Farmworker Alliance of New York—one of many local collectives that organizes in solidarity with the CIW—expects hundreds of community members to attend the event, which features a film festival, workshops on sustainability and the food justice movement, hourly actions at Trader Joe’s, and games for kids. The festival will close with an action at the Brooklyn-based Trader Joe’s at 4pm.

Charlene Obernauer is the executive director of Long Island Jobs with Justice and one of the founding members of the Community/Farmworker Alliance, NYC.