Does the personal information of every parent who buys their child a prepaid cell phone belong in a police database?

Suffolk County legislators must ask themselves this question on Tuesday, June 7, when they vote on a bill that would create a registry of all prepaid cell phone purchases in the county.

The proposal, sponsored by Legis. Kate Browning (WFP-Shirley), would require consumers to present two forms of identification when purchasing a prepaid cell phone.  Retailers would have to enter their customers’ personal information into the police department’s database or maintain paper records, which would be available to any requesting law enforcement officer, with or without a warrant. A retailer’s failure to comply is a misdemeanor punishable by a fine of up to $1,000 and/or up to one year in jail.

Presented as an anti-crime measure, this misguided proposal would violate the privacy rights of anyone who chooses to purchase prepaid phones. It would treat innocent people as criminal suspects for merely purchasing a cell phone. It would target the poor and would have a disproportionate effect on Latinos and other minority groups.  And it would do little, if anything, to make us safer – it may well do just the opposite.

Most people who buy prepaid cell phones use them for entirely innocent reasons. Low-income residents often rely on inexpensive, prepaid cell phones. Individuals with poor credit can buy these phones without a credit check. Immigrants, tourists, and other visitors to Suffolk County purchase prepaid phones so they are not bound by a long-term contract.

The bill’s sponsors seem not to appreciate the threat it poses to privacy rights. An everyday purchase will result in people’s personal information being stored in a police databank or in the hands of retailers who are not trained to protect such information. Abuse would be inevitable, which could cause an increase in identity theft.

And there is no evidence to suggest that this proposal will actually help law enforcement. Would-be criminals could simply avoid identification by purchasing prepaid cell phones outside of Suffolk County.

Requiring retailers to effectively create their own database of consumers’ personal information represents a dangerous precedent. It places an unnecessary and overwhelming burden on small businesses, and puts them in the policing business without necessary training, safeguards – or consent.

We all want safe communities. Instead of depending upon unjust and unproven policy initiatives, we should use the tools we have to protect our communities against crime and terrorism in smart, efficient and lawful ways.

Legis. Browning suggests that we all have to sacrifice some freedom to ensure security. But we shouldn’t compromise personal liberty – and common sense – for the sake of poorly conceived legislation that will do little to help capture criminals, but is far more likely to incriminate the innocent.

Sign the petition below and come out to the Suffolk County Legislature on June 7 at 9:30am to show your opposition to the bill (click here for directions). 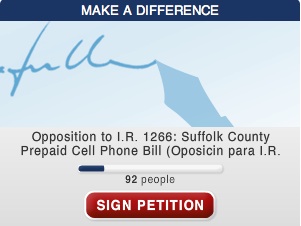 Jessica Glynn is the supervising attorney at SEPA Mujer, Elizabeth Joynes is the Skadden Fellow at LatinoJustice PRLDEF, and Amol Sinha is the director of the Suffolk County Chapter of the New York Civil Liberties Union.