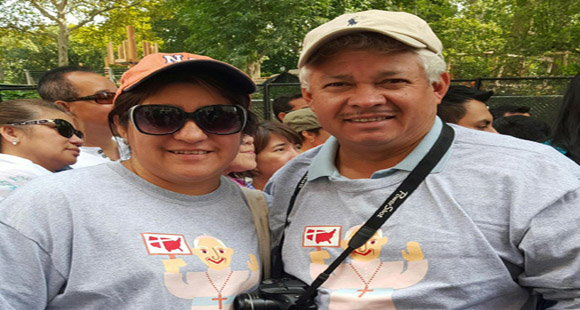 Pope Francis left the U.S. after a historic visit but his powerful message and his way of inspiring faith and peace will remain in his followers’ memories forever.

And this is true, especially for Catholics who made enormous sacrifices during the Pope’s visit to New York City last week.

Family members and friends crowded the streets of Manhattan, as they were waiting long hours to see the Pope passing by for a few minutes, or even seconds. They did not care about being among the multitude. They just wanted to see the pontiff waving and smiling at them.

Juan Lemus, 51, an immigrant from Mexico, who now resides in Sag Harbor, did not want to lose his chance and went with his wife, Lourdes, to Central Park Friday morning to see the leader of the Catholic church. They waited for almost seven hours.

“Everybody was there hoping to see him [the Pope] and we also hoped to see him at least for a moment,” Juan said. “Our hope was stronger than the tiredness of waiting,” Juan said.

But it was worth it. At the end, happiness filled up their hearts.

The atmosphere was full of joy and excitement, as people could not believe that they were actually seeing the Pope at a shorter distance than they had not ever imagined. 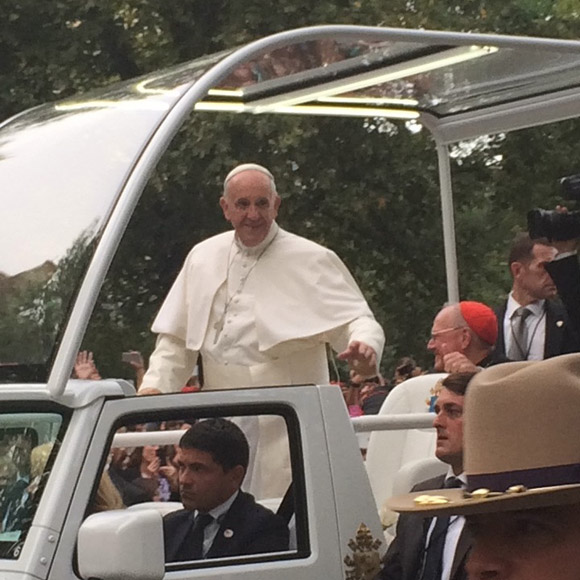 Juan and Lourdes were able to take a photo of Pope Francis.

“When I finally saw him, I felt a huge emotion, a feeling that is hard to describe because only people who have been able to see him, can explain this feeling,” he said.

“After he [The Pope] passed by in front of me, I saw many people around me with big smiles on their faces, and some people expressed that gladness through tears and crying,” Juan explained.

Juan and Lourdes were among the thousands of Hispanic Catholics that went to see Pope Francis in New York. The media also reported that the majority of people who waited on the streets in Washington D.C. were Hispanics, carrying the flags of their homeland.

For instance, 35% of Catholics living in New York City are Hispanics, according to the Pew Research Center.

However, faith was the main motivation why people went to see the Pope.

“It was very important to see the Pope because he is in charge of the Church, and God chooses him to represent us and guide us,” Juan said. “After God, he is taking care of all of us believers.”

During his stay in the U.S., Pope Francis spoke about being compassionate and inclusive with the immigrant community, taking care of the Earth and protecting our environment, and the importance of preserving family values. And immigrants, like Juan and Lourdes, understood those ideas.

“Seeing Pope Francis has helped me because he talks about the importance of families as the nucleus of the world,” Juan said. “Classes and race did not matter. Everything Pope Francis said was for everybody,” he concluded.