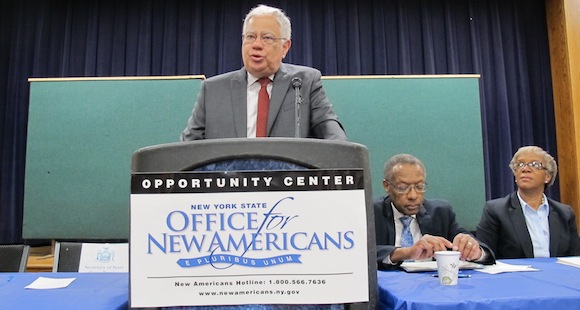 At a conference at Kennedy Memorial Park in Hempstead, a coalition of New York state government and local groups kicked off a program earlier today providing Long Island immigrants with a pathway to citizenship.

New York Secretary of State Cesar A. Perales, who oversees the New York State Office for New Americans (ONA), spoke to media and members of Long Island’s communities as part of the official launch.

Perales quoted Gov. Andrew Cuomo as saying, “If there is something we can do to better integrate immigrants into our society then we ought to do it.”

ONA was opened in 2012 to provide free English classes, citizenship exam prep courses, and resources for entrepreneurial immigrants. However, Perales said, “Today we are going one step further.”

That step was the creation of the Pathways to Citizenship LI program, which is led by Citi Community Development and the State of New York, in partnership with the New York Department of State, ONA, the New York State Department of Labor, the Village of Hempstead, Bethpage Federal Credit Union, the Central American Refugee Center (CARECEN), and the United Way of Long Island.

In addition, Bethpage Federal Credit Union will provide micro loans for those who cannot afford the $680 citizenship application fee.

Perales said, “I don’t need to tell you why it is so important to address the needs of immigrants on Long Island.” He noted that the Congressional Budget Office has done numerous studies documenting the positive economic impact immigrants have on the country and the communities in which they live.

However, he said, “Many skilled workers cannot practice their occupation here.” That, he said, is why ONA is launching a joint initiative with the New York State Department of Labor to help immigrants obtain licenses and certification for skills and education obtained in their native countries.

Pat Young, program director at CARECEN and a blogger for Long Island Wins, further explained that civic education was another critical aspect of the Pathways program, which would help immigrants “become voters and productive members of society.”

He added, “The first step is outreach.”

To that point, Jorge Montalvo, director of ONA and a special advisor to Perales, told Long Island Wins that ONA is taking a “boots on the ground” approach to getting the word out. In addition to translating all documents affiliated with the Pathways program in the eight major languages as required by executive orders in both counties, ONA plans to enlist the aid of volunteers and civic organizations in going door to door to communicate directly with Long Island’s immigrant communities in their native tongue.

For more information about this program and to register, please visit the New York State Office for New Americans website at www.newamericans.ny.gov or call CARECEN at 516-489-8330.