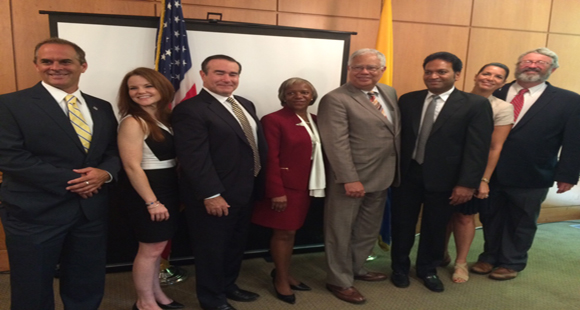 If you are thinking about applying for citizenship and you don’t have the means but live on Long Island, a new State program could help you do it at no cost.

The Pathway to Citizenship was launched in June 2014, to help low-income and moderate-income permanent residents in the process of becoming U.S. citizens.

The program provides legal assistance, training to take the naturalization exam, and in some cases, it gives loans to people who qualify, to help them pay the application fee.

The immediate goal was to assist 250 people in the first year, but the program over exceeded initial expectations, and was able to benefit around 576 people in getting their citizenship.

“People from different backgrounds want to become citizens and this program helps them with the process,” said Jorge Montalvo, Regional Director, New York State Office for New Americans, during a press conference on Friday, September 18th. “We provide legal assistant to determine if people are eligible,” he said.

Precisely, providing loans is the most essential part of the program.

Low-income people may qualify for a relief and avoid paying the citizenship application fee, but not all people are eligible for this relief. Pathway to Citizenship, in partnership with Bethpage Federal Credit Union, gives loans to moderate-income individuals, up to the application fee total cost, which is around $680, according to Alisa Damas, Program Coordinator for the Central American Refugee Center, CARECEN.

“Pathway to Citizenship is a program that gives loans to people who don’t have the money to file the application to become a citizen. It has become very expensive to become a citizen. Not only you have to pass the exam but you have to pay a fee and many people don’t have the money to pay it,” said New York State Secretary of State, Cesar A. Perales, to Long Island Wins, at the press conference.

“People come here and either the get a waiver, which is that the government lets them apply for free and if they are not that poor, we arrange them to get a loan to pay the fee,” Perales said.

Individuals who are not proficient in English get help through this program, to take the citizenship exam in the language they speak.

Lourdes Manzanares, 38, an immigrant from Honduras, who resides in the Village of Freeport, recently became naturalized through this program.

“Sometimes people think that becoming a citizen is expensive and they don’t want to do it, but once they know about the program, they decide to apply,” Manzanares said. “They are really good, classes are good, and they give us all the information we need to be ready for the exam… that is what motivated me,” she said.

The program also offers loans to immigrants who have graduated college back in their countries, so they can revalidate their degrees.

“Today, we have launched the second part of the program and we are going to give loans to immigrants who want to get a certificate to do the jobs they know, in the U.S.,” Montalvo said.