An alarming number of students cannot afford to go to college. A large number of those students happen to be undocumented and find themselves living in the shadows through no fault of their own. They were brought to the US as children by parents seeking better economic opportunities and have never lived in another country as adults. These students grew up in the States and attended US schools throughout their childhood and teenage years.

They are Americans because they grew up in Long Island. They speak, write, and understand English. They are American in all but in one piece of paper that says they are, and Americans should be able to afford a college education as a means to empower themselves and contribute to the economic growth of our communities.

Paying for college tuition is not easy. I know this because of personal experience. My family is a middle-class family that has bills and other responsibilities to take care of like most other residents of Long Island and student loans are outrageous nowadays, akin to a second mortgage on a home. But in spite of all of this, only because of that piece of paper that separates us, I can get financial aid to go to college and my friends who are undocumented can’t. And I see them struggling and juggling two or three jobs, while going to college full time, to be able to afford it. And I want them to have the same access and opportunities that I have.

I came to New York for the first time when I was seven years old from the Dominican Republic and had the opportunity to grow up and be raised here. I am not much different from my neighbors. I celebrate Thanksgiving and the Fourth of July. My extended family comes over on Christmas and has dinner with us just like my neighbor’s families. I speak, write and understand English; otherwise I wouldn’t be writing this op-ed. I went to grade school, middle school, and high school here and just started college in St. Joseph’s University of Long Island. My friends who are undocumented are also like me. The only difference is that I was able to get papers through one of my parents and they crossed the border with theirs when they were children, making it impossible for them to acquire documentation under the current immigration laws. 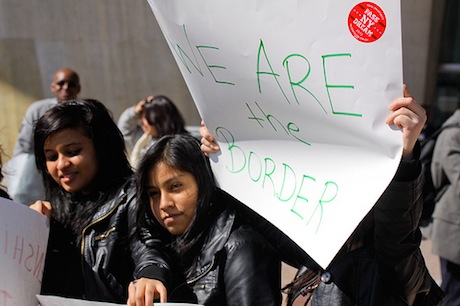 I want my friends to be able to Dream just like I do, of a better future for themselves and their families. This week, leaders in the State of New York will decide whether to include the DREAM Act legislation in this year’s final budget. This is why I urge the New York Legislature, Governor Andrew Cuomo, Assembly Speaker Sheldon Silver, and Senate Majority Leader Dean Skelos to pass the New York DREAM Act and DREAM Fund legislations. These bills would lessen the monetary burden on undocumented students when paying for college tuition. The DREAM legislation would create a private fund targeted at children of immigrants, undocumented or documented, who have no access to federal financial assistance per federal law. Additionally, the bills would give access to undocumented students who graduated from a New York State high school to the state Tuition Assistance Program, or TAP, as long as they complete two years of higher education or complete a two-year service in the military.

Thus far, no senator on Long Island has shown support for either one of the legislations, and only a few assemblymembers have shown their support. As a young voter and as part of a growing diverse voter block in Long Island, my vote for future senators, assembymembers, and local politicians will depend on how they stand on this issue. The time is now to pass this legislation and to give access to education to all!

And if you want to get directly involved, please take a minute to make these quick and important phone calls:

“Hi, My name is ______ and I live in ______ and I’m calling to urge ______ (name of elected official) to include the New York DREAM Act, which opens up the Tuition Assistance Program to undocumented youth, in the final enacted budget this year.”

With your support, we can pass the DREAM Act this year. Please make these calls and tell our elected leaders that all New Yorkers should have the right to a college education.

Manuel Gómez is a Dominican-American student at St. Joseph’s College in Patchogue. He is a political science major and aspires to be a lawyer in the future. Manuel is a member of Make the Road New York, and is advocating, with other documented and undocumented youth, for the passage of the DREAM legislation in New York State.