Wendy Sabrozo recently graduated from Nassau Community College with her associate’s degree in English and a 4.0 GPA. She applied to 13 colleges and universities, and was accepted to all of them, including Cornell University and Sarah Lawrence College, her dream schools.

But since she is undocumented—she was brought to the US at age 6 when her parents moved to Elmont—she isn’t eligible for financial aid and student loans. She can’t even work legally to defray the cost of tuition, although a part-time job would hardly dent the $50,000 annual bill at many universities.

“Nothing would be better than to be able to access education and obtain the degree that we dream about, but many schools are unaffordable,” Sabrozo told a reporter for AOL Noticias. “I want to study, get ahead with my family, and contribute to this country.”

Faced with an academic roadblock, Sabrozo decided to speak out about her immigration status, putting herself at risk of everything from deportation to tension with friends. In March, she and several other undocumented students addressed the board of trustees at Nassau Community College, asking the college to help them advocate for the New York DREAM Act, a bill that would give undocumented students equal access to state financial aid.

More recently, she joined an April 4 panel discussion at SUNY Old Westbury that examined the plight of undocumented students and the policies that would allow those students to better contribute to the communities that they call home. 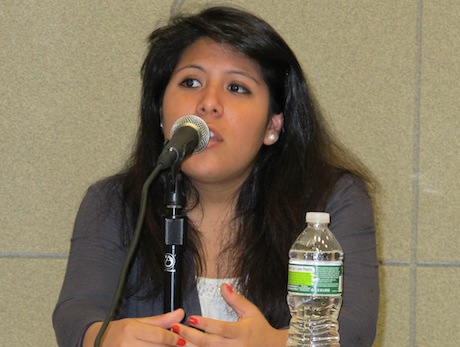 At “Undocumented, Unafraid, Unapologetic,” more than 100 students heard her story, as well as that of Joaquin Villalobos, who recently spoke to Long Island Wins about being gay, undocumented, and college-aspirant. In addition, students learned about the federal DREAM Act, which, unlike the state bill, would provide a pathway to citizenship to qualifying undocumented youth.

Several students in attendance spoke of similar difficulties with their immigration status; others related stories of friends and family members.

Aside from its educational value, the event provided an opportunity to take action: Following the panel discussion, a dozen students and professors volunteered to start an immigrant rights club at SUNY Old Westbury.

The event was co-organized by Long Island Wins and Long Island Immigrant Students Advocates, in partnership with the college’s American Studies department.

“New York has a long tradition of being pro-immigrant, and its strength is based in a large part on support from them,” said Osman Canales, the director of Long Island Immigrant Students Advocates, speaking to AOL Noticias. “So this is why I think it should be the leader in the passage of the DREAM Act at the national level.”