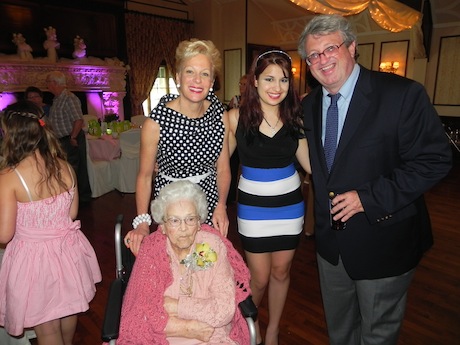 Winnie Hassell, my sister Barbara, my niece Alice, and me

I went to Winnie Hassell’s 100th birthday party on Sunday. Winnie is an immigrant from Barbados who has lived in the US for almost 65 years, but who has never lost her lilting West Indian accent. She arrived here during the Depression but went back to Barbados in the 1940s to marry and have three children. During the war she lived in British Guyana where she had a fourth child. She and her husband finally went back to the US after the war when prolonged absences threatened the family’s legal status.

Setting up house in Woodhaven, Winnie played host to visiting folks from Barbados, some of whom put down roots here. Her four kids all married Americans and began their own families, having more than a dozen children among them. Great grandchildren were at Sunday’s celebration in numbers aplenty. All of them make pilgrimages back “home” to Barbados.

My father’s brother Jack married into her large West Indian family in the 1950s. While Winnie was no relation to me, we all called her “Grannie” and played at her house almost every weekend as kids. My sister and I became part of her extended family. She took me to see my first Broadway musical and comforted me when my mother died when I was 16. I’ve seen her many times each year for 54 years now. And frankly, she was already kind of old when I first got to know her as a little boy!

Winnie lives in Stewart Manor now, but her heart still lives in two worlds—Barbados and the US.