The members of the Unitarian Universalist Fellowship at Stony Brook have always been avid supporters of the Welcoming Long Island initiative and even consider their own congregation to be a welcoming group.

The Reverend Margaret Allen (whom recently became the “settled minister” of the congregation) has been an ally of mine since I assumed my position as community organizer for Long Island Wins less than a year ago. 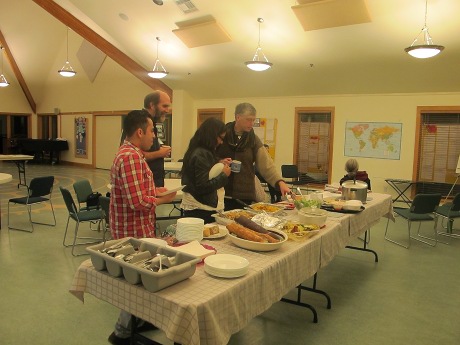 I was delighted to accept her offer to co-host a “We Are All Immigrants” potluck dinner, as well as bringing together groups I’ve worked with in the past: the Unitarian Universalist Fellowship at Stony Brook (UUFSB), Setauket Presbyterian Church and Long Island Immigrant Student Advocates. Potluck dinners are one of the many ways Welcoming America and its local affiliates, such as Welcoming Long Island and Long Island Wins, seeks to build bridges between the native-born and foreign-born populations in the United States. This is all part of an ongoing effort to create more welcoming communities that will help immigrants integrate more easily into the social fabric of their adopted hometowns.

The night started off with an introduction of the food that everyone brought, which included foreign dishes native to Europe, Asia, South America, and Central America. Although I am not of Salvadoran descent, I had brought pupusas (a traditional Salvadoran dish) because growing up in Brentwood, New York, everything I knew about Latino culture was due to the strong Salvadoran presence in my neighborhood. This is a reminder that we are not solely defined by our social limitations or boundaries. 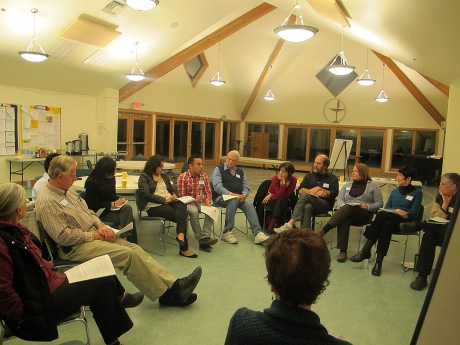 After a very hearty meal, we all settled in to listen to stories about our backgrounds and where we had all originated from. It was a night of compelling and fascinating tales that stretched across four continents, including the United States, Europe, Southeast Asia and South America.

Reverend Allen provided a world map so that we could visually trace everyone’s lineage. To have an idea of the richness of the exercise, here is a list of the countries that came up while we shared our stories: Ireland, Scotland, Thailand, Switzerland, Slovakia, El Salvador, and Peru. At times, the discussion turned serious and reflective, as people shared their personal histories and struggles, but as a whole it was a very enjoyable and educational experience for everyone involved. 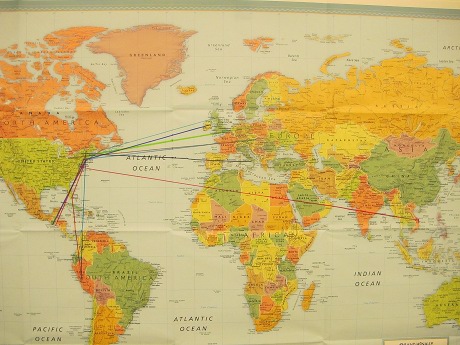 At the end of the night, everyone could agree that the workshop was very inspirational and reenergized everyone’s desire to build more bridges between the native- and foreign-born populations of Long Island.

I look forward to continuing my work with the Unitarian Universalist Fellowship at Stony Brook and would also like to thank members of Setauket Presbyterian Church and the Long Island Immigrant Student Advocates for being in attendance!

Be sure to take a look at the pictures from our event!