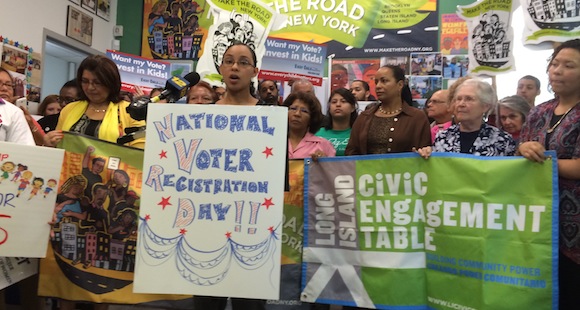 More than a dozen advocacy and civic organizations gathered in Brentwood on Tuesday to raise awareness for National Voter Registration Day and help citizens register to vote.

The meeting was organized by the Long Island Civic Engagement Table (LICET). The deadline for voter registration is October 10.

“As a registered voter, I’m proud to be here today, knocking on doors and registering voters,” said Janeth Farfán, a member of Make the Road New York, speaking through a translator. “It’s tough work, but it’s needed. What it means is, we are registering voters for better schools, and better college opportunities for our DREAMers.”

Christina Romero, an intern at SEPA Mujer, said voting is the only way local communities like those on Long Island are part of the national conversation. “It is the first step to creating political change. It is our civic responsibility to register to vote. It is the only way we can tell our elected officials how we feel about homeland security, health care, public education, social security, and other important issues like immigration reform,” she said.

Speaking specifically to Hispanic voters, George Siberón of the Hempstead Hispanic Civic Association, said not to underestimate how much power a voter has at the polls—especially at the local level. Using Hempstead as an example, he noted that there are more than 4,000 registered Hispanic voters, yet very few typically turn out to vote.

“In a village where it takes 600 votes to win a school board election and 1,600 to win a mayoral race… it doesn’t make sense,” he said.

According to Steve McFarland, coordinator at LICET, his organization had set a goal of 2,500 new voters by Oct, 10. To date, they have already registered 3,000.