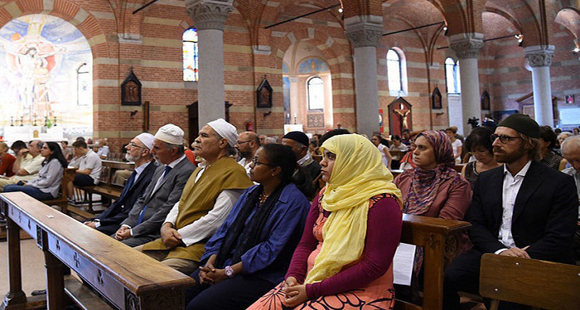 We would like to share the letter to the editor sent to Newsday by Isma H. Chaudhry, Long Island Wins’ board member and President of the Islamic Center of Long Island, and Habeeb U. Ahmed, President-elect.

The letter is in response to the terrorist attack on the Catholic Church in France. Chaudhry and Ahmed condemn religious extremism and the use of violence against innocent lives, and they remind us that the Quran teaches us that Christians are our brothers and sisters and that we should have respect for other religions.

Letter: No justification for terrorism in Islam

On behalf of the Islamic Center of Long Island, we strongly condemn the terrorist attack on the Catholic Church in Saint-Etienne-du-Rouvray, France. We are extremely shocked and saddened by the ruthless killing of the Rev. Jacques Hamel.

Islam teaches us to respect the sanctity of clergy and houses of worship and strongly condemns religious extremism and the use of violence against innocent lives. There is no justification in Islam for extremism or terrorism.

God prescribes in the Quran that Muslims should respect, protect and defend monasteries, churches, synagogues and mosques, as the name of God is revered in these places. According to the teachings of the Quran and the practices of prophet Muhammad and the caliphs, even during tribal warfare there were strict instructions to respect places of worship, and that no harm should come to priests, or anyone taking refuge in a house of worship.

The Quran also reminds us that Christians are our brothers and sisters in faith, and that “. . . you will find nearest of them in affection to the believers those who say, ‘We are Christians.’ That is because among them are priests and monks and because they are not arrogant” (Quran 5:82).

Our thoughts and prayers are with the victims of this terrorist attack, their families and the people of Saint-Etienne-du-Rouvray.

EDITOR’S NOTE: THE WRITERS ARE PRESIDENT AND PRESIDENT-ELECT OF THE ISLAMIC CENTER OF LONG ISLAND.