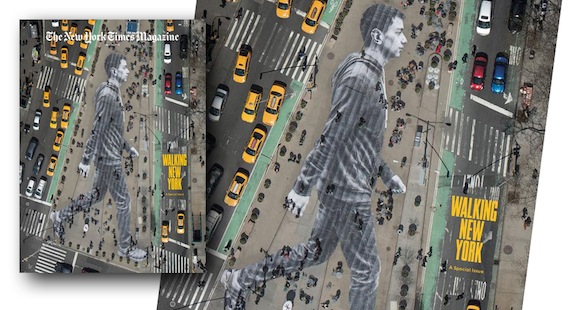 If you were walking near the Flatiron Building in New York City some time around April 11, you may have noticed a 150-foot-tall image of a young immigrant with a unique gait.

Or maybe not. And that was the point.

The cover of the latest edition of New York Time Magazine featured this image pasted to the triangle pavement on Flatiron Plaza, between Fifth Avenue, Broadway and East 23rd Street. The image is the work of French artist JR, who is known for pasting large photographs all over the world.

The purpose of the piece was to highlight how New York’s 3.1 million immigrants walk among us every day, often unnoticed, but still very much there, very much a part of our lives and a part of the city.

(Editor’s Note: The magazine’s cover story was not related to immigration.)

Indeed, while the image was clearly visible from the sky, it was actually quite difficult to make out for those on the ground. Thousands trod passed it, going about their daily lives, hardly aware of its significant presence.

JR was featured in the New York Times last year for his work on Ellis Island, which featured large archival photographs of immigrants displayed throughout the island’s abandoned hospital. Immigration has been a central focus of his art lately.

For the magazine cover, JR photographed 16 immigrants who arrived in New York within the last year. The image chosen was that of Elmar Aliyev, a 20-year-old waiter from Azerbaijan. He arrived in the U.S. in August after winning a green-card lottery. He told the New York Times that he likes to walk around Central Park and around the Flatiron Plaza because they are featured in his favorite movie, “Home Alone 2.”

The New York Times has a video going behind the scenes of how the massive image was constructed—and ultimately deconstructed—in the span of a day.