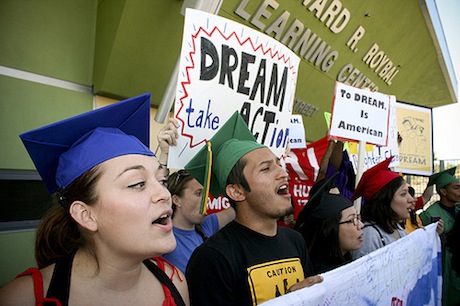 The New York State Board of Regents voted yesterday to endorse passage of the federal DREAM Act, legislation that would create a pathway to citizenship for undocumented immigrant youth who meet certain qualifications.

Education Commissioner John King said that there are over 300,000 undocumented students in New York State, adding that passage of the DREAM Act “is an urgent civil rights issue, it is morally urgent to ensure that every student in our K through 12 system has access to opportunities.”

Many undocumented students who were brought to the United States as children are shocked to find out that they can’t work in the US, no matter how well they do in school, and that higher education is often out of reach. “Our conviction is that those students should have access to college and careers in the same way as the classmates who are sitting next to them in their schools,” King said.

The New York legislature passed a state version of the DREAM Act nearly a decade ago allowing undocumented students who graduate from a New York high school to pay in-state tuition at SUNY and CUNY schools. However, the students are cut off from many forms of financial aid.

King spoke about the decision to the Legislative Gazette:

We also at [a Board of Regents] meeting yesterday discussed the possibility of exploring how we might at the state level take steps to ensure people have access to financial aid for undocumented students. So, this is a high priority for me as commissioner, for our Board, and we are going to work hard to move the issue forward.

The Regents will take up the issue of financial aid at their November board meeting.

The struggle for fairness for undocumented children in the schools has been fought since Congress, for the first time ever, tried to effectively bar the undocumented from state universities back in 1996. Groups like the New York Immigration Coalition and the Long Island Immigrant Alliance have been pressing the state for greater openness during the years after the in-state tuition victory.

The focus on the state, it is hoped, will help keep the DREAM Act alive in difficult political times.