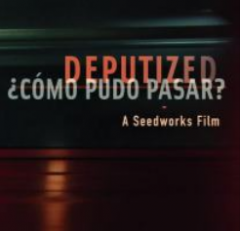 I watched the outstanding new documentary Deputized on Sunday at the Hamptons Take 2 Film Festival in Sag Harbor. The film is the best of three documentaries made so far that cover the November 8, 2008 attack on Marcelo Lucero.  About a hundred people attended the screening including Joselo Lucero and the families of Chris Overton and Jeff Conroy. I’ll be writing a review of the film later, but watching it led me to recall the events of four years ago. Over the next few weeks, I’ll give you some of my thoughts on the case and the film.

The first thing I did after watching it was to look at the confession of Jeff Conroy. Conroy was the 17 year old convicted of First Degree Manslaughter as a Hate Crime for the killing. Within minutes of the attack, he was captured by the police, turned over the knife with blood on it that was used to kill Lucero to the cops, and confessed to stabbing Lucero to the arresting officer. Hours later Conroy made a confession to a police detective and wrote out and signed a written confession.

The confession shows the lead-up to the killing. Conroy, then 17 years old, was at a park in Medford with some friends. He wrote that:

I was in Jordan Dasch’s S.U.V. with about ten people. I was with Jordan, Jose, Chris, Anthony Hartford, Kevin Shea, Nick Hausch and three girls, Felicia, Nicole and Michelle Cassidy. We all attend Patchogue-Medford High School.
We were not at the park very long, maybe a half hour, when Anthony Hartford said, “Let’s fuck up some Mexicans.”
The girls didn’t want any part of it Michelle said “No Chill,” meaning no not to do it (fuck up some Mexicans). The rest of us (all the boys) were in agreement to do it. The girls caught a ride with Jason who owns a dark blue car.

Reading this confession again reminded me that the young men, nearly all of whom had gone on similar hunting expeditions that they called “beaner jumping” or “beaner hopping,” knew what they were going to drive to Patchogue to do that night. The attack was not some last minute happenstance of some kids driving around. They had decided that they were going to “fuck up some Mexicans” before they ever left the park.

The fact that the girls dissented and advised the young men not to do it indicates that even if there was a pack mentality at work in the decision to seek victims, there was at least one voice that advised against doing it (Michelle) and the other two girls expressed dissent by leaving. This was noticed by Conroy. It demonstrates that the seven young men heard at least one voice against their plan and decided to proceed anyway.

What Conroy wrote next is chilling:

We drove to Patchogue Village, knowing that’s where Spanish people hang out. We parked on a side street, near Main Street and go out and walked as a group. Everyone was pretty amped up and it was clear what we were going to do.