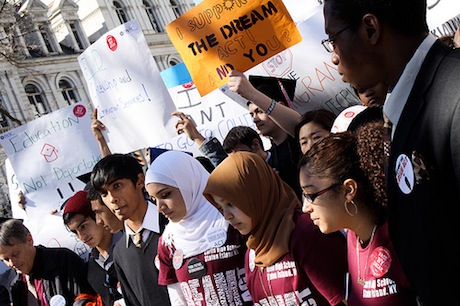 The push is underway for the passage of the New York DREAM Act, which would make state college tuition assistance available to undocumented immigrants. To sign a petition in support of the legislation, click here.

The passage of the bill will hinge on whether or not it can get through the GOP-majority State Senate. As has been reported by The New York Times, two freshman state senators from Long Island—Lee Zeldin and Jack Martins—serve districts with a sizable number of Latino residents, and both have said they would consider voting for the bill.

One of Martins’ constituents has already written to him about the importance of the legislation, and was kind enough to share her message. Marge Rogatz is the president of Community Advocates, Inc., located in Roslyn:

I’m writing today to strongly urge you to support the New York Dream Act. You did so much as Mayor to make Mineola a more equitable and better place for all of its inhabitants. In my work on several boards, I not only look at and try to deal with problems affecting Long Island’s most vulnerable residents, but also as a member of the SONYMA [State of New York Mortgage Agency] board, I am involved with the serious issues that face low- and moderate-income families across the state. Hispanic youngsters who grew up here, who only know the US as their home, and who are studious and eager to go to college, deserve the opportunity to realize their ambitions. Passing the New York Dream Act would not only benefit them, it would benefit their families, their communities, the Nassau-Suffolk region and the entire state.”

Here are the numbers of the nine state senators from Long Island: