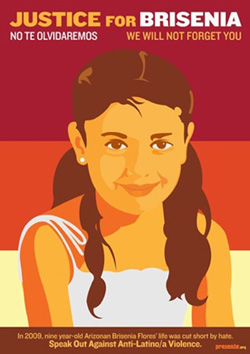 Jury selection is underway in the last of three prosecutions for the 2009 murders of 9-year-old Brisenia Flores and her father, Raul, in their Arizona home.

Minuteman leader Shawna Forde and her colleague Jason Bush have already been sentenced to death for the killings. Albert Gaxiola, whose trial is expected to begin next week, also faces the death penalty.

Gaxiola is alleged to have helped the members of Minuteman American Defense scout the Flores’ home and witnesses say he participated in the home invasion that left two members of the family dead and another seriously wounded.

Gaxiola is said to have been motivated by financial, rather than political, considerations. Unlike Forde and Bush, he is not believed to have links to high-level members of the anti-immigrant movement.