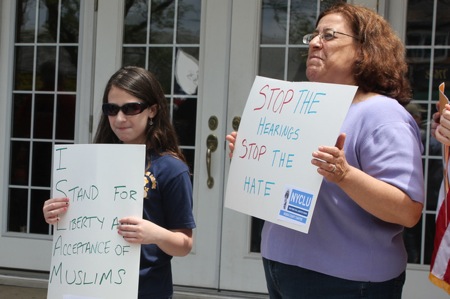 In the aftermath of the terrorist attack in Norway by Anders Breivik, few people talking about his manifesto have actually read every word of it. Dartmouth professor Jeff Sharlet is the exception.

According to an NPR interview with Sharlet, Breivik was heavily influenced by American anti-Muslim writers. He says that while these writers strongly disapprove of Breivik’s actions, they have “ramped up the fear” of Muslim immigrants “to the boiling point.” According to Sharlet, those anti-Muslim writers also assert that they believe in non-violence.

You can listen to the interview here.

Image courtesy of the Nassau Chapter of the New York Civil Liberties Union.