For more than a year the focus of the immigration reform movement nationally and on Long Island has been on the passage of comprehensive immigration reform in Congress. A year ago this week this goal seemed very realistic. The Senate had passes a reform bill with overwhelming support, the President actively campaigned for reform, and some Republicans, like Peter King, had moved into the reform camp.

As June ends, the chance to realize the hopes of last year have diminished to a near impossibility. So now we are calling for the President to act and act now. With more than 1,000 people a day being deported, delay in hopes that the House will act is irresponsible. At the same time that we insist that President Obama take executive action, we cannot let Congress off the hook.

The President’s powers are limited in this area, but there are millions of people he could help right away. We need to put pressure on the Obama Administration to act to expand Deferred Action for Childhood Arrivals (DACA) to include all of the DREAMers, nearly a third of whom were left out of DACA’s protections currently. New rules to provide temporary work permits to the parents of U.S. Citizens and DREAMers are also within the presidential powers and should be enacted as soon as possible.

Any positive action on behalf of immigrants that the president takes over the summer may only remain in place for the next thirty months until a new president is sworn in. Then anything President Obama has done positively for immigrants can be vitiated by his successor. We can expect that at least some politicians will run for office in opposition to even minor reforms by President Obama. This is why Congress has to be held accountable for its failure this year and why the campaign for Congressional action will not end until meaningful legislation is passed.

Please join me and scores of other Long Islanders at Ross Park in Brentwood on Saturday June 28 at Noon to show our disappointment and anger at the inaction of the House of Representatives and our insistence that the President no longer wait for those who have no intention on coming aboard. 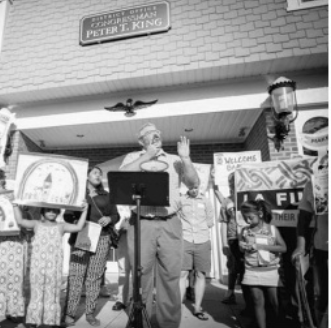