A month ago I would have thought nothing of it, just another overly dramatic corporate safety video about something that will never actually happen. But after mass shootings at movie theater in Colorado and a Sikh temple in Wisconsin, we’ve all been reminded how awful attacks can strike unannounced.

The attack on the Sikh temple, however, wasn’t wholly unannounced. The shooter, 40-year-old Army veteran Wade Michael Page, had been a practicing adherent to white power ideologies for at least a decade, probably longer. His white power lifestyle was public enough that the Southern Poverty Law Center (SPLC), a hate watchdog group, had been tracking him since 2001. Hours after the attack, the SPLC was able to tell reporters that Page was a “frustrated neo-Nazi who had been the leader of a racist white-power band” and “part of the white power music scene since 2000.” Page’s affiliation with white power was hardly secret; he had posted photos on the Internet displaying his tattoos, which linked him to Hammerskin Nation, one of the country’s leading skinhead groups, according to news accounts.

Reportedly, the FBI had known about Page, but didn’t consider him a serious threat. Perhaps it doesn’t even matter; in our public discourse, someone like this never would have been branded a potential terrorist. Post-9/11, political opportunists and overly acquiescent newsrooms have reinforced the idea that terrorism is something that comes from a cave in Afghanistan, not from a white power rally.

That’s problematic. We should all be worried about Page’s brand of domestic terrorism, just as we should be worried about militant religious extremists or deranged Jokers with access to powerful weapons, like James Holmes in Colorado. “Page appears to have hated blacks, Jews, Latinos, and probably everything else associated with modern multicultural America,” political science professor Naunihal Singh recently wrote in The New Yorker. “Here is a figure whose malevolence should frighten all Americans, not just Sikhs, in the same way that Holmes should terrify all of us, not just those who watch movies at midnight.” 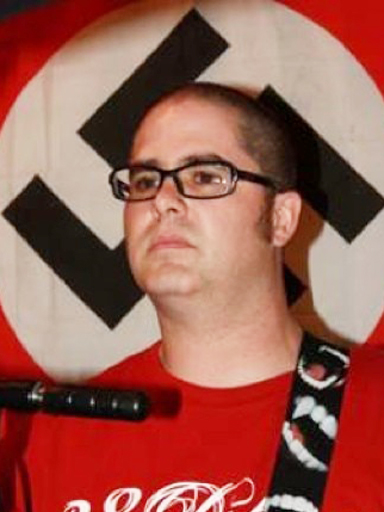 Despite that reality, the media hasn’t had much of an appetite for the story of a lone wolf white supremacist, even if that lone wolf happens to have a lot of well-armed brothers and sisters. Singh elaborates in The New Yorker:

Sadly, the media has ignored the universal elements of this story, distracted perhaps by the unfamiliar names and thick accents of the victims’ families. They present a narrative more reassuring to their viewers, one which rarely uses the word terrorism and which makes it clear that you have little to worry about if you’re not Sikh or Muslim. As a Sikh teaching at a Catholic university in the Midwest, I was both confused and offended by this framing. One need not be Pastor Niemöller to understand our shared loss, or to remember that a similar set of beliefs motivated Timothy McVeigh to kill a hundred and sixty-eight (mainly white) Americans in Oklahoma City.

A week later, post-Paul Ryan, Oak Creek has largely receded from public consciousness, along with the important policy issues it raises. There will be little debate about claims that the Department of Homeland Security has understaffed its analysis of domestic counterrorism in response to political pressure. There will also be little attention to the accusation that the military has repeatedly been willing to accept white supremacists in its ranks. Representative Peter King will continue to hold hearings about the threat posed to America by Islamic extremism while refusing to investigate domestic right-wing groups, even though right-wing groups are more worrisome by any systematic measure.

Singh writes that “the massacre in Oak Creek is treated as a tragedy for Sikhs in America rather than a tragedy for all Americans,” an idea that’s also espoused by author and editor Hartosh Singh Bal in a recent piece in The New York Times. Bal rejects the idea that cultural education will be enough to stop similar attacks in the future, asserting that the real problem is hate-guided extremism:

So while it’s understandable that in the wake of the Wisconsin killings President Barack Obama is intent on acknowledging the Sikhs’ contribution to the United States, the Sikh religion is being praised for its inclusiveness and some Sikhs hope to cast the incident as an opportunity to be better understood, these well-meaning efforts are absurd.

Does anyone really believe that if Sikhs are recognized for who they are, they will no longer be figures of hate?

Looking at the problem this way is a classic case of stigmatizing the victim instead of the perpetrator. The white supremacist views of Wade M. Page are what count. It is they that need to be confronted head on, and they cannot be confronted by pretending that they are the aberrant manifestation of an isolated fringe. 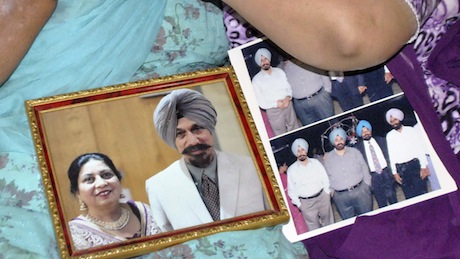 Satwant Singh Kaleka (second from left), pictured here with his wife, was killed in the shooting at the Sikh temple in Oak Creek, Wisconsin. (AP via Fox News)

The common thread in both of these pieces is the need for the US government, and the media, to take the threat of homegrown terrorism more seriously. Page’s commitment to the white power movement should have been a strong warning to counter-terrorism officials, but the idea that such views could lead to an act of terrorism hasn’t been popular in the past decade. In 2009, faced with conservative pressure, Homeland Security repudiated a report warning about the threat of right-wing extremists and domestic terrorism, going so far as to dissolve the team working on the project.

Part of preventing another tragedy like this will require an honest assessment of what constitutes a terroristic threat. Should we be worried about another attack like 9/11? Yes—I can’t imagine a higher priority when it comes to national security. But we need to give credence to the risks posed by domestic extremist groups, however uncomfortable it might be to open up a dialogue about racism, hatred, and the militants who use those sentiments to fuel horrible acts of violence.