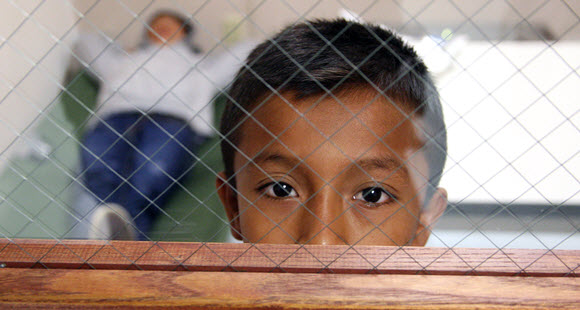 As articles abound on the politics and posturing of what to do about the 57,000 children fleeing violence in Central America, it’s important to have a clear picture of the kind of conditions that are inspiring these kids—some as young as five years old—to make the dangerous trek to the U.S. border.

Here are just some of the stories these young children have to tell. Long Island Wins urges everyone to read and reflect on the pictures painted here, then ask yourself, “What would I want the U.S. to do if these were my children?”

• Kevin Briseño, 18, and his friend Omar Barrera, 19, from El Salvador, both spoke about why it may be a death sentence for those who try to leave but are caught and sent back. One friend fled a year and a half ago after he was threatened and gang members murdered his father, a policeman. Their friend was trying to reach his mother in Maryland, but he was stopped in Mexico and returned to San Salvador. “He was murdered the week after he got back,” Barrera said, shaking his head. The Desert Sun, 7/13/14

• Kenneth, a 7-year old from Honduras set out on his green bicycle to search for his brother, Anthony, who had gone missing. He started his hunt at a notorious gang hangout known as the “crazy house.” They were found within days of each other, both dead. Anthony, 13, and a friend had been shot in the head; Kenneth had been tortured and beaten with sticks and rocks. They were among seven children murdered in the La Pradera neighborhood of San Pedro Sula in April alone. New York Times, 7/9/14

• Josephine, a 16-year old from El Salvador: The head of the gang that controlled her neighborhood wanted Josefina to be his girlfriend and threatened to kidnap her or to kill one of her family members if she didn’t comply. Josefina knew another girl from her community who had become the girlfriend of a gang member and had been forced to have sex with all the gang members. Josefina didn’t want this for herself. Once the gang started harassing her, she didn’t feel safe, so she stopped going to school and stayed at home until her family was able to make arrangements for her to travel to the U.S. UNCHR report

• Nodwin, an 11-year old from Honduras: “Big people force the children to sell bad things, and if they don’t do it, they rape them or they kill them.” Nodwin once witnessed a boy his own age gang-raped in a neighborhood park after the child refused to join a local drug gang. “They were stripping a kid naked, and I went to tell the kid’s mom. Later, I went home, but I didn’t want to leave my house, because they could have done the same thing to me.” PBS NewsHour, 6/20/14

• David, a 16-year old from Guatemala, reported the following: “Gangs in a nearby neighborhood wanted to kill me and some other people. They wanted me to give them money, but what money was I supposed to give them? I didn’t have any. They asked me if I knew who they were, if I could identify them. I said no, because I knew if I said yes they would kill me. They held my cousin and me for three hours, tied up. My cousin was able to untie the rope and he helped me untie mine. We heard gun shots and we ran. They kept looking for us, but we escaped.” UNCHR report

• Cristian Omar Reyes, an 11-year-old sixth grader from Honduras lost his father in March after he was robbed and murdered by gangs while working as a security guard protecting a pastry truck. Three people he knows were murdered this year. Four others were gunned down on a nearby corner in the span of two weeks at the beginning of this year. A girl his age resisted being robbed of $5. She was clubbed over the head and dragged off by two men who cut a hole in her throat, stuffed her panties in it, and left her body in a ravine across the street from Cristian’s house. New York Times, 7/11/14

• One day in May, seven gang members boarded a public bus in San Salvador, El Salvador’s capital. They were looking for two members of a rival gang. But they fired indiscriminately at passengers, killing six people and wounding a score of others, including a 2-year-old. “The gangs are in schools, neighborhoods. They’re everywhere,” said Alison Ramirez, who works on a U.S.-funded, violence-prevention project in El Salvador and frequently visits Honduras and Guatemala. “Even if the kids don’t want to be a part of it, they get caught up in the cross fire, extorted, threatened.” The Desert Sun, 7/13/14

• An older man with two granddaughters, ages 7 and 10, said, “I left Honduras because they already killed three of my four sons. I can’t stay to wait for them to take away my granddaughters. There the gangs kill for anything, take our houses, our pay. Everything.” Asked if he wanted to go home, a six-year-old Honduran boy began to cry and told the reporter, “They kill people there, and you can’t play.” La Jornada, 6/29/14

• Two workers at the San Pedro Sula morgue in Honduras said the number of bodies they receive is significantly higher today than it was a year ago. Stories are also piling up of young children forced to work as lookouts, messengers or spies for the gangs. Eight children, between the ages of 7 and 13, were kidnapped and killed in La Pardera barrio during May. Word on the street is that they were killed for refusing to join the dominant local gang. “In this job you become hardened to seeing death,” says one of the morgue workers who recovered some of the bodies, and asks his name not be published. “But to have to recover a child who has been cut to pieces and burned. That was just too much.” The Guardian, 7/9/14