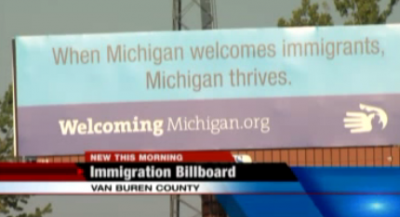 As some of you know, Long Island Wins is involved in a community outreach program called Welcoming Long Island. The program helps bring immigrants and native born together in community. There are other Welcoming groups elsewhere in the United States. They do things like organize reading circles, hold cultural gatherings, and organize forums. Welcoming Michigan put up a billboard alongside the Interstate.

The billboard has a simple message: “When Michigan welcomes immigrants, Michigan thrives”.

It is hardly a sharp edged political message. In fact, the group is is supported by Republican Governor Rick Snyder.

According to local news reports, Welcoming Michigan says that; “We are trying to spread positive and welcoming images about immigrants in Michigan and highlight and lift up their contributions to our local economies.”

In spite of the innocuous message, the local news says the billboard has sparked a sharp debate. While Michigan is only 6% immigrant, apparently there are some folks there who think that is just too many.