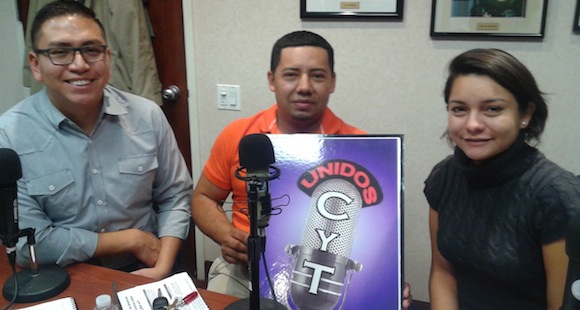 To close off 2014, I interviewed Walter Barrientos and Carlos Reyes from Make The Road NY for my Spanish Radio segment with CyTUnidos, regarding what many undocumented immigrants would consider the most important announcement of the year.

On November 20, President Barack Obama announced his plan for administrative relief. One of the most powerful components of the program is the Deferred Action for Parent Accountability (DAPA), which provides a temporary deferral of deportation with a three-year work permit for parents of U.S. citizens or legal permanent resident children. This program alone could benefit up to 5 million undocumented parents currently living in the United States. Although March is the assumed month for when applications will be released, many details about what documents will be needed to apply are not yet known.

“Knowing that there are about 100,000 undocumented people living on Long Island, it is predicted that about 50,000 of those will be eligible for administrative relief,” said Barrientos.

This, he said, offers a window of hope for those who have been living in the shadows for so many years. Reyes shared with us that the Long Island community has already responded with a very positive and optimistic attitude. Long Island immigrants have been showing up in large numbers to Make the Road’s Brentwood office looking for information on this life-changing opportunity.

Despite what may happen politically after President Obama steps out of office, eligible individuals believe the benefits outweigh the risks and are hoping to apply as soon as they can.

Both Barrientos and Reyes emphasized that this program is not permanent and does not cover all 11 million undocumented people in the U.S., which means the fight for a comprehensive immigration reform remains a priority.