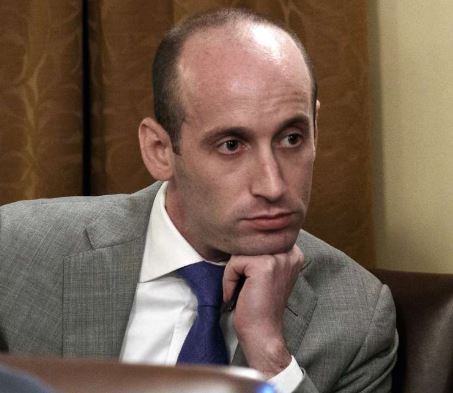 The Southern Poverty Law Center is publishing a series of reports exposing e-mails from Trump’s top immigration aid Stephen Miller linking to white supremacist groups and ideologies. The e-mails were sent by Miller to the right-wing website Breitbart News in 2015 and 2016 when he was on the staff of Sen. Jeff Sessions. The e-mails were leaked to SPLC’s investigatory project Hate Watch.

According to the SPLC:

Hatewatch reviewed more than 900 previously private emails Miller sent to Breitbart editors from March 4, 2015, to June 27, 2016. Miller does not converse along a wide range of topics in the emails. His focus is strikingly narrow – more than 80 percent of the emails Hatewatch reviewed relate to or appear on threads relating to the subjects of race or immigration. Hatewatch made multiple attempts to reach the White House for a comment from Miller about the content of his emails but did not receive any reply.

Miller’s perspective on race and immigration across the emails is repetitious. When discussing crime, which he does scores of times, Miller focuses on offenses committed by nonwhites. On immigration, he touches solely on the perspective of severely limiting or ending nonwhite immigration to the United States. Hatewatch was unable to find any examples of Miller writing sympathetically or even in neutral tones about any person who is nonwhite or foreign-born.

…Katie McHugh, who was an editor for Breitbart from April 2014 to June 2017, leaked the emails to Hatewatch in June to review, analyze and disseminate to the public. McHugh was 23 when she started at Breitbart and also became active in the anti-immigrant movement, frequently rubbing shoulders with white nationalists. McHugh was fired from Breitbart in 2017 after posting anti-Muslim tweets. She has since renounced the far right.

McHugh told Hatewatch that Breitbart editors introduced her to Miller in 2015 with an understanding he would influence the direction of her reporting. For that reason, and because Miller would have regarded her as a fellow traveler of the anti-immigrant movement, McHugh sometimes starts conversations with Miller in the emails, seeking his opinion on news stories. Other times, Miller directly suggests story ideas to McHugh, or tells her how to shape Breitbart’s coverage. Periodically, Miller asks McHugh if he can speak to her by phone, taking conversations offline.

“What Stephen Miller sent to me in those emails has become policy at the Trump administration,” McHugh told Hatewatch.

Miller sent a story from the white nationalist website VDARE to McHugh on Oct. 23, 2015, the emails show. White nationalist Peter Brimelow founded VDARE in 1999. The website traffics in the “white genocide” or “great replacement” myth, which suggests that nonwhite people are systematically and deliberately wiping white people off the planet.

McHugh started the email conversation by asking if Hurricane Patricia could drive refugees into the United States. The hurricane battered parts of Central America, Mexico and Texas, and the media heavily covered the storm. Miller replied to her by underscoring the possibility that Mexican survivors of the storm could be given temporary protected status (TPS), a George H.W. Bush-era policy that would enable them to live and work in the United States for a limited stay:

McHugh, Oct. 23, 2015, 6:10 p.m. ET: “This being the worst hurricane ever recorded, what are the chances it wreaks destruction on Mexico and drives a mass migration to the U.S. border?”

The VDARE story by Steve Sailer, an anti-immigration activist who traffics in discredited race science, focused on instances in which the United States offered refugees temporary protected status. The article was posted the same day Miller shared it with McHugh.

In September, the Trump administration denied temporary protected status to residents of the Bahamas fleeing the destruction of Hurricane Dorian despite widespread destruction.

“I don’t want to allow people that weren’t supposed to be in the Bahamas to come into the United States, including some very bad people and some very bad gang members and some very, very bad drug dealers,” Trump said of Bahamians on Sept. 9.

The ethnic makeup of the Bahamas is more than 90% black, according to statistics from the CIA. The administration has also attempted to cut TPS for residents of other countries, including Honduras and Nepal. Sailer mentioned both Honduras and Nepal in the context of TPS in his VDARE story.