Alabama has passed the toughest immigration enforcement law in the country. Now children born in the USA, American citizens, are living in fear. Some children are afraid to go to school. According to Bill Lawrence, principal of Foley Elementary in Foley, Alabama, “Most of these kids are American citizens. American citizens attending American schools, afraid.” He continued, “A child in fear can’t learn.” Children in his school were terrified Mom and Dad would not be home when they got home from school.

The new law, HB 56, requires people to have proof of legal status for almost every interaction in their lives, and it’s already having dire consequences for many of Alabama’s children. As the Center for American Progress explains, “Alabama’s new ‘show me your papers’ immigration law is ripping apart families in the state.” More than half of the estimated 120,000 undocumented immigrants who live in Alabama—2.5 percent of the state’s population—live in ‘mixed status’ families. But consider the children: 85 percent of the children of undocumented immigrants live in ‘mixed status’ families, often meaning the children are citizens but one or more of the parents are not. The result is that thousands of Alabama parents and children now live in constant fear of separation. 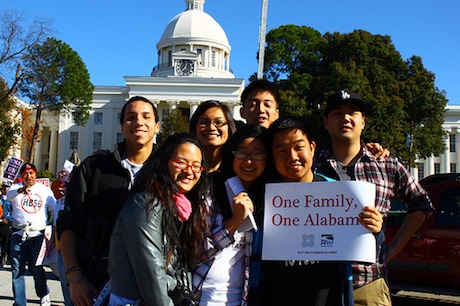 Among its many requirements, HB 56 requires elementary and secondary schools to determine the immigration status of incoming students and their parents and authorizes the school to report them to federal authorities. As the head of the American Federation of Teachers, Randi Weingarten, put it, “Educators should not be put in the position of being immigration law enforcers. Teachers should be safety nets, not snitches—guardians, not guards.”

HB 56 requires police and some government officials to demand proof of legal status if they have “reasonable suspicion” a person may be in the country illegally, including during routine traffic stops or arrests, and criminalizes unlawful presence. It also makes it a felony for an illegal immigrant to conduct a business transaction with any governmental body in the state; nullifies any contract an undocumented person enters into, including applying for a loan or signing a lease; and makes it a crime for unauthorized immigrants to apply for or solicit work. Advocates and community members reported that hundreds of Latinos did not report to work or attend school when the law first passed, and hundreds of families fled the state.

The Department of Justice, civil rights and church groups all filed legal challenges after the law went into effect last summer. So far, federal courts have temporarily blocked several provisions of the law, including the provision requiring K-12 school officials to determine students’ immigration status and that of their parents, and the provision that makes it a crime for immigrants to fail to complete or carry an alien registration card. But the state of Alabama has been allowed to go forward with many other sections of the law. Now, as law enforcement agencies are clarifying procedures on what parts of the law to enforce and the law is being further reviewed in federal court, many parents and workers are not taking chances.

The Center for American Progress has created lists of the “Top 10 Reasons Alabama’s New Immigration Law Is a Disaster” for the state’s government, economy, community safety, public health, faith communities, rule of law, education, and families. They point out fear has led many parents to sign power of attorney documents to allow friends or family members to legally care for their children if they are deported. If parents are deported many U.S. citizen children may be forced into foster care, though “Alabama state officials themselves are concerned about the potential impact on the already overburdened state foster care system.” Shattered Families, a recent report by the Applied Research Center, noted that more than 5,000 children nationally who are currently in foster care have parents who have been detained or deported. The Center for American Progress also points out that when breadwinners are deported from mixed-status families: “U.S. citizen spouses and children will have to take on additional jobs, potentially drop out of school, and seek additional social services just to keep the family afloat. The resulting cycle of potential poverty and despair is a prescription for instability and a detriment to the entire fabric of Alabama communities.” 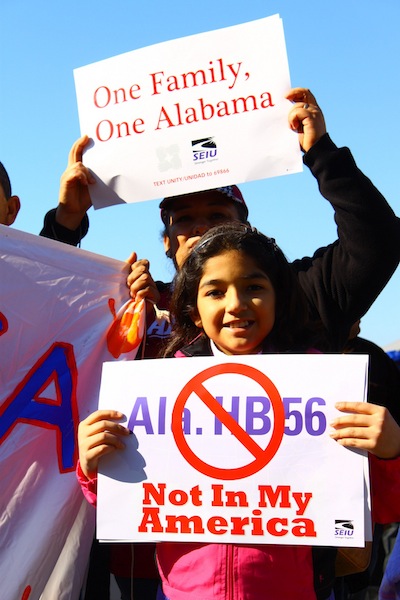 They note some U.S. citizen children in mixed-status families are being forced to shoulder new burdens for their families, including taking over the driving and shopping if they have valid licenses. Of course, undocumented children are a target themselves, including many who were brought to the United States as infants or small children and have never known another home. The overwhelming sense of fear is apparent even among the youngest children, as school administrators like those at Foley Elementary know very well—and isn’t just limited to children in immigrant families. A Birmingham school counselor said, “My sixth graders of African American descent were asking me if they were going to have to go back to Africa. There is a fear factor out there that is written between the lines of the law that’s having a chilling effect on Alabama classrooms.”

As one US-citizen son put it: “At school we were taught about the Civil Rights period. This is the same thing—it’s happening again. I make good grades, so does my brother. We are normally at the top of our class. I try my hardest to be good. The people making this law, they need to put themselves in our shoes and think about how they’re splitting families.” As a slight ray of hope, there is pressure mounting in the state to repeal HB 56 or parts of it in the state’s legislative session. The irony of an era of fear, repression, and profiling repeating itself in Alabama is not lost on many onlookers. For those who refuse to return to that era in Alabama or any other part of America, the time to speak up is now.

Marian Wright Edelman is president of the Children’s Defense Fund and its Action Council whose Leave No Child Behind mission is to ensure every child a Healthy Start, a Head Start, a Fair Start, a Safe Start, and a Moral Start in life and successful passage to adulthood with the help of caring families and communities.