This article is part of The Immigrants’ Civil War. Scroll to the bottom for a complete list of articles.

Missouri was in a state of civil war even before the Confederate attack on Fort Sumter. Pro-Confederate Governor Claiborne Jackson had tried, and failed, to have a state convention vote for secession. He schemed to take over the federal arsenal in St. Louis for the Confederacy, and he made plans to mobilize his militia for the Southern cause. Meanwhile, thousands of German immigrants began organizing and drilling in preparation for a showdown with Jackson.1

When news came of the firing on Sumter, the Germans, under the leadership of Captain Nathaniel Lyon, secured the arsenal and arrested hundreds of the governor’s militia at Camp Jackson outside of St. Louis.

German communities organized recruiting meetings in St. Louis where hundreds of immigrants volunteered. Immigrant John Buegel described one of these gatherings in a German hall:

We found there …that the large hall was full of young, sturdy Germans. Of course, a good lunch with fine beer was not lacking… Since we Germans at the time were looked upon as belonging to an unworthy nation, and Americans…looked upon us with contempt and distain, we decided…to sell our skins as dearly as possible [and enlist].2

For weeks after the overwhelmingly German volunteers had saved St. Louis from Governor Jackson’s machinations, the Germans of Missouri were the only effective Union force in that state. They organized patrols to keep the secessionists at bay, and offered support to Unionist refugees fleeing the southern part of the state. Even more importantly, they organized a political agenda that demanded that the federal authorities remove alleged pro-Southern army officers and send in troops from other states to help secure Missouri. To do this, they formed a political alliance with Missouri Congressman Frank Blair, whose brother was in Lincoln’s cabinet. 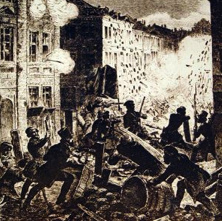 While the boldness of their actions gave the Germans a heady sense of accomplishment, they also became anxious as they realized their isolation. Their precarious situation was recognized by Ozias Mather Hatch, a friend of Lincoln’s from his days as an Illinois lawyer.  Hatch wrote to the president: “It is lamentable, nevertheless true, that there are very few fighting Union men in Mo. that are not Germans.”3

The German papers in St. Louis called on “the Americans” to shoulder their share of the burden of defending the Union in editorials like this one:

While the Germans, with very few exceptions, are ready and willing to do their duty…many of the Americans have been torn apart with their interests pulling them one way and their sympathies the other. This situation must end now, since even the native-born must decide either to join with the Germans…or openly enlist in the rebel army.4

The Germans also worried that the third largest group in the city, Irish immigrants, were not rallying to the Union cause as they had in Boston and New York. The St. Louis German leaders, many of whom were openly anti-Catholic liberals, now realized that it would not be easy to court people on whom they had recently cast aspersions. They were not reassured when Archbishop Peter Kenrick, the spiritual leader of the city’s Irish Catholic immigrants, advised his flock to follow a course of love and understanding in the crisis “for love comes from God.” The German papers, true to form, attacked the Archbishop’s moderate tone.5

By the end of May, the German papers reported with relief that a regiment had “begun to form that was predominantly Irish; four companies are already full…. [N]ow with almost all the Irish on our side…the war will have a happy conclusion.”6

Southern-sympathizing native-born Missourians would fill the ranks of Gov. Jackson’s militia gathering in Jefferson City, the state capital. While many Irish enlisted in the Union cause alongside the Germans, others would slip out of St. Louis to join the pro-Confederate force. These immigrant Confederates would later meet their Unionist countrymen from Ireland at Wilson’s Creek, ensuring that the American Civil War was mirrored by a civil war within the Irish community in St. Louis.7

The prospect of communal warfare haunted the Germans. They saw their alienage as a powerful weapon in the hands of the Confederates. Southern partisans reportedly circulated rumors that the Germans intended to murder native-born civilians. The Germans feared that “the secessionists are spreading these sorts of stupid rumors…to turn a political struggle into a battle between ethnic groups,” said one newspaper.8

The Germans put their hopes for free Missouri in the hands of a young army officer, Captain (soon to be Colonel) Nathaniel Lyon. The Connecticut native was a career army man. He had shown his ruthlessness in fighting Indians in California, where he had not only slaughtered native warriors, but had mercilessly killed children in an effort to wipe out an entire settlement. Lyon is estimated to have killed 400 Indians to “punish” the natives for the killing of three whites. His biographer says that during the massacres, Lyon “exhibited a ferocity that bordered on sadism.”9

Lyon worked closely with pro-Union politician Frank Blair and with the military hero of the Germans, Franz Sigel. Sigel was a German military academy-trained professional soldier who had led democratic forces in Germany during the 1848 Revolution.

In the leading history of the German rising in Missouri, historians William Garrett Piston and Richard Hatcher observe the tilt in power toward German immigrants during that period:

The rapid influx of immigrants between 1850 and 1860 made St. Louis one of the fastest growing cities in the nation. The ability of Lyon, Blair, and Sigel to raise and equip German American regiments rapidly signaled a profound shift in Missouri’s political and social makeup. Power was moving out of the hands of the [slave holders] in the rather sleepy state capital [of Jefferson City], their strength was rural and local. Their orientation, when it went beyond the state, was Southern. The German Americans…reflected the rise of urban influences. Increasingly tied together by railways, they were national rather than sectional in outlook.10

On June 13, 1861, Lyon set off from St. Louis with 2,000 mostly German volunteers to throw Gov. Jackson and his armed supporters out of the state and destroy the insurrection in its earliest stage.

Lyon’s crusade against the secessionists would be relentless. He would be hailed as a hero by the Germans, but his actions would irretrievably polarize the German Unionists from many native-born Missourians.