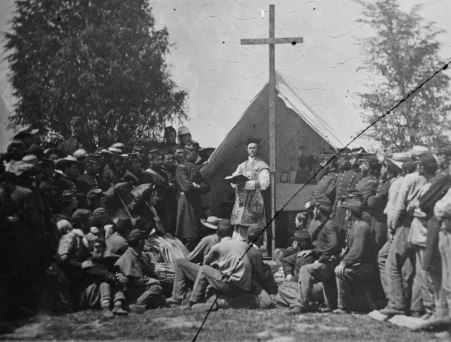 Scroll down for a complete list of The Immigrants’ Civil War articles.

When Confederates fired on Fort Sumter, it was not clear what New York’s best-known regiment would do. The New York State Militia’s “Fighting Irish” 69th Infantry Regiment was one of the most controversial, and beloved, military units in the United States. But its loyalty to the Union and its willingness to submit to Lincoln’s control were in doubt.

Today we think of militias as paramilitary groups attached to extremist political movements. Historians like to compare Civil War-era militias to today’s National Guard: part-time soldiers under state control who could be federalized in times of national emergency. Upon closer examination, however, we find that the militia units of 1861 were not exact counterparts of either.

The 69th New York was formed in 1849. The city was flooding with refugees from the Potato Famine and exiles connected with the failed 1848 revolt against British rule. Irish immigrant leaders saw the formation of an Irish military unit as a way of focusing a dispirited community on a future in which they would be able to challenge their overlords.

The leadership of the regiment would come from a cadre of recent nationalist exiles associated with the Young Ireland revolutionary movement who believed that Irish in their homeland and in the growing diaspora needed an armed force to win respect.

As anti-immigrant violence broke out in the 1850s, New York’s vulnerable Irish turned to the 69th as a guarantor of their community’s physical preservation. The regiment’s tight discipline and fine ceremonial performance were a source of pride in a community that felt itself despised as primitives by its Nativist foes.

The 69th also contained the seed of hope within it that one day Irish soldiers from America would return to Ireland to help liberate their homeland. Its officers told their men that they were not simply training to perform the ordinary duties of an American militia regiment, they were also preparing for the day they would take arms against the English.

It was a non-violent battle against British royalty that put the 69th in the national spotlight.

In 1860, Michael Corcoran, the commander of the 69th at that time, refused to follow the order of the governor of New York to march in a parade honoring the visiting Prince of Wales. Corcoran had been involved in a peasant guerrilla movement in Ireland and he and his men were determined that they would not honor the future leader of the country they believed had allowed more than a million Irish to die miserable deaths from starvation.

New York state authorities arrested Corcoran and ordered him to face a court-martial. His defense only angered them more:

“Although I am a citizen of America, I am a native of Ireland,” Corcoran said. “In the Prince of Wales I recognize the representative of my country’s oppressors.”1

A flag carried by the 69th when they left NY bore the cryptic date “11th Oct. 1860.” This was the day the unit had snubbed the Prince of Wales.
The incident widened an already gaping chasm between the Irish American poor, who rallied to their champion Corcoran, and the state’s elite, who saw the Irish as rebellious, alien, and radical. The rich affiliated themselves with the Republican Party. The Irish did not.

The 69th New York, like most Irish institutions, had become politically identified with the Democratic Party, the party that defended the immigrant against the Know Nothings, the workingman against the bosses – and the slaveholder against the abolitionists.

It was the unit’s identification with the Democrats that would lead many New Yorkers to wonder where its loyalties would lie in the hours after Fort Sumter. That, and the fact that Corcoran still faced prison for his slight against British royalty.

The 69th would soon go off to war and its very unit number would become synonymous with heroism. But before it left New York, Colonel Corcoran would speak at an April 21, 1861, meeting of the Fenian Brotherhood, an Irish nationalist society.

Corcoran, who a few months later would be one of the first heroes of the Union cause, told the assembled Brothers that if they were not already in military units, they should avoid service in the war. Their purpose, he believed, was to liberate Ireland, not die in a war between fanatical native-born secessionists and abolitionists. He warned that if the Irish community was infected with war fever, its best men would be killed before they could ever serve their native land and all their preparations for Ireland’s freedom would be wasted.2

The months between his speech and the Battle of Bull Run would test whether Irish America heeded Corcoran’s advice and stayed out of the army, or followed Corcoran’s example and marched off to war.