If you’re a white person living in a predominantly Latino community, you may have been referred to as an “Anglo” at some point. Many immigrants to the United States have a preconceived notion that Americans who can trace their ancestry to Europe are Anglos or English. Recent Census data indicates that what Americans say about their ancestry actually points to a very non-Anglo America.

It’s usually a surprise to people when I tell them that the largest ancestry group in the U.S. is actually German, by a long shot. Some 49 million Americans say they trace their roots to Germany. From Western New York all the way across the country to Washington State, in virtually all counties north of the Mason-Dixon line the Germans are the largest ethnic groups. During World War I there were active campaigns to discourage assertions of German identity, with many states banning the teaching of the German language. The Holocaust and the Second World War were near death blows to the preservation of America’s German-American memory, even though Germans here nearly unanimously rejected Hitler. It is likely that more German-Americans fought in World War II than any other ethnic group.

African-Americans make up the second largest ethnic group. Until the 1920s, roughly 90% of blacks lived in the former slave states. During the Great Migration, African-Americans moved to the Northeast, the new industrial cities of the Midwest like Detroit, and to California. Today’s dispersal of African-Americans throughout the country is a modern development since at the time of the Civil War, most Northern states had populations that were less than 5% black. Today, 41 million Americans are from families that originate from Sub-Saharan Africa.

The third largest group would surprise anyone who is not from here. Ireland is one of the smallest countries in Europe, but 36 million Irish-Americans live here. That’s four times more than the people living in Ireland!

There are a number of explanations for the large number of Irish here. First, the Irish came to America early in their history and they had a large multigenerational migration here that lasted for more than 70 years. Second, they had larger families than many other ethnicities. But perhaps more importantly, the Irish were more likely than other immigrant groups to marry outside their ethnic group and because they were culturally assertive, the children of these mixed families took on an Irish ethnic identity. Irish cultural reminders like music, dance and St. Patrick’s Day incorporate the partially Irish-descended into the ethnic group in ways that other European ethnic groups do not.

Mexican-Americans may soon overtake the Irish. With 32 million people, this is the fastest-growing ethnicity. Like the Irish, the Mexicans engage in active cultural promotion binding the community together and they have the advantage of continued immigration in the modern era. Cinco de Mayo has become something of a Mexican St. Patrick’s Day, a way the culture can be displayed to the larger American public that tends to prompt those of mixed ethnicity to identify as Mexicans.

The real Anglos, the English, are the fifth largest group here. About 27 million Americans say they are descended from English settlers and immigrants. By the 1840s, English immigration had largely stopped. The lack of cultural replenishment meant that many Americans who may have genealogical links to England lost any sense of cultural identity to the country. Like the Germans, the fact that we fought two wars with England meant that for many years Englishness was distained even by those who could trace their roots there.

The country’s 18 million Italians are concentrated in the Northeast. Italians form the largest ethnic group in New York State. Although the 1924 Immigration Law was designed to prevent Italians from coming to the U.S., such large numbers stayed here illegally that Italian communities stayed strong until an amnesty was granted that many took advantage of in the 1960s and 1970s. Nationwide, Italians are the sixth largest ethnic group. 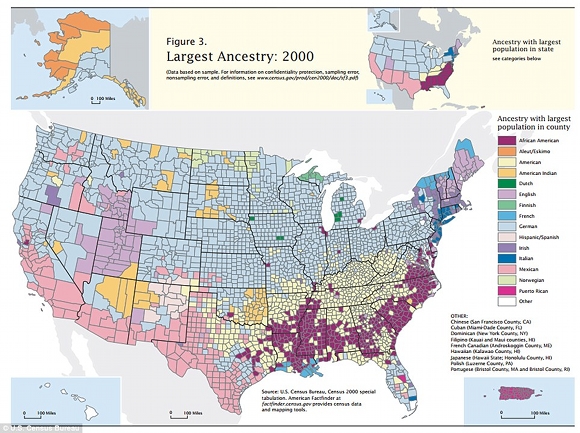