The Tenement Museum is one of the best sites in the United States to learn about American immigration history. The Lower East Side landmark is dedicated to telling the stories of immigrant New Yorkers from the Civil War Era to the mid-20th Century through tours that immerse visitors in the lives of a family. The tours have always included interactive discussions with visitors on immigration and immigration history.

Reuters reports that over the last year, derogatory remarks by visitors about modern immigrants have increased dramatically. According to Reuters; “with elections having stirred passions nationwide over the topic of immigration and refugees, museum employees say they are confronted with an unprecedented number of negative comments by visitors about today’s migrants. The previously infrequent incidents now occur every day, museum officials say. ”

Miriam Bader, the museum’s director of education, told Reuters that “You’ll hear much more blanket comments, or comments like ‘You know, the immigrants of the past aren’t like those of today’…’they’re taking too much that other people should have’, or ‘they’re taking our jobs.'”

Cherrye Davis, a 30-year-old guide, said during election season she has seen more heated debates among visitors comparing immigrants from centuries past with today’s newcomers.

Davis recalled how a tour that features the story of an early 20th century Italian immigrant overstaying her visa thrust the room into the modern national conversation about the country’s current 11 million undocumented immigrants.

“I could see people take a deep breath,” she said about the episode that took place a few weeks before the election.

One visitor, a woman in her 50s, interjected: “It was different back then, immigrants back then were different,” according to Davis.

Miriam Bader says that “The political climate has created a need for new skills or superpowers to facilitate the conversation.”

The increase hostility towards contemporary immigrants led the museum to institute a mandatory retraining program in September.

Annie Polland, director of the museum’s programs, told The Forward that the mueum’s mission is “to connect past to present, so we talk about immigrants historically to help us shed light on immigration today.” 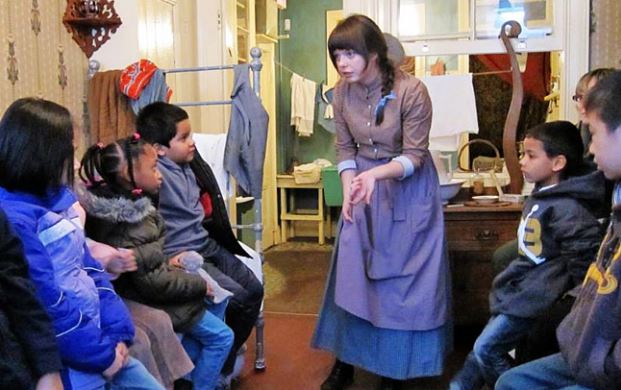 Education Manager Kathryn Lloyd discussed the measures taken recently by the museum to preserve the mission in tours:

Since late summer, educators “have come together in small groups at the start of each month to discuss practices and skills relevant to the work,” Lloyd wrote. Polland explained those groups have been focused on developing practices for opening tour groups up to greater exploration of personal stories.

“Some of the groups have discussed this idea of shared authority: How do we create spaces for people to also tell their stories, and how do you make that work?” she said. Another practice they’ve devoted attention to is “generous listening,” which Polland explained as “this idea of really letting people speak trying to kind of understand where they might be coming from.” An internal document outlining principles of generous listening includes adapting tours to the specific interests of a group and rephrasing questions to gain greater understanding.

Polland couldn’t concretely share whether educators felt the new practices had increased the openness and decreased tension on the tours. Still, she said, “I would like to hope there’s more a sense of comfort with the fact that we can’t predict what’s going to happen on a tour.” She thinks the Museum’s cultural role has “become more important” as debate over immigration has become more fraught, but thinks more people are also experiencing a positive draw to its “mission is to enhance appreciation for the immigrants who have shaped and continue to shape our national identity.”

Polland told The Forward that for all the potential conflict of the more contentious immigration climate; “One educator said she’d had numerous people come up to her and say I’ve come to the museum specifically in the last month or the last week because I wanted to talk about immigration. Our tenement space has become almost a sacred space, in this time, to have important conversations about immigration.”