On Monday night, the Suffolk County government did something historic when it comes to communicating with the community, especially the county’s communities of color.

Suffolk County Executive Steve Bellone and the Office of Community Services/ Minority Affairs held a wide-open meeting on community policing – a panel discussion with representatives from the Police Department and community leaders. The event – which I had the privilege of moderating—was the first of its kind in Suffolk County. 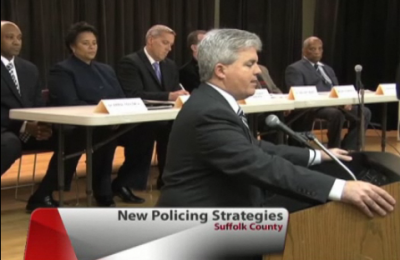 This new openness isn’t surprising. Since County Executive Bellone took office there has been a major shift in the way the county is communicating with its residents on the issues that matter. It’s a very exciting development, and certainly a leap forward that we’re now working towards a climate of respect and welcoming, rather than…well…some of the previous policies. Thank you, County Executive Bellone for that!

The goal of the forum was to introduce the new leadership in the Suffolk County Police Department to the community; to build a more collaborative relationship between the police department and the people it’s sworn to protect; and to begin to formulate strategies for the future that will make Long Island safer for immigrants and native Long Islanders alike.

More than 100 people attended the forum, which was held at the Brentwood Public Library. Following the panel discussion, questions were taken from the audience that expressed safety issues, building trust with law enforcement and what measures were being taken to increase cultural sensitivity.

You can watch a video report on the meeting here.