It’s largely expected that the Senate’s “Gang of Eight” will release a comprehensive immigration reform proposal within the coming days. In the meantime, families continue to be separated due to our broken immigration system.

Every year, 400,000 undocumented immigrants are deported. One out of every four of these Americans have family members living in the United States.

Central Islip community members gathered at St. John of God Church on Tuesday evening in honor of Long Islanders that have been deported this year. The vigil also called on our elected officials to finally move forward on immigration reform and to stop tearing families apart.

“It’s critical that we pass immigration reform,” said Dick Koubek, community outreach organizer with Long Island Jobs With Justice. “Keeping families together is the number one humanistic goal we have. This is for all Americans. Immigrants contribute to our society. This is about a lot more than families, this is about what’s good for the United States. And what’s good for the U.S. begins by helping families and by strengthening our economy.”

The event is part of an ongoing campaign by immigrant advocacy groups to call attention to injustices against immigrants as a direct result of our broken immigration system. 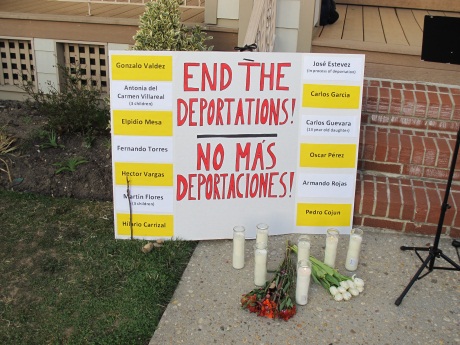 “It’s time for change, it’s time for reform,” added Koubeck. “The election of 2012 sent a message that both parties better come together on this. The issue of immigration resonates with people all over the country, not just immigrants. We’re all immigrants in one way or another. The time for change is now.”

“There needs to be a complete reformation of our immigration system,” said Max Jean-Gilles from United Food and Commercial Workers Local 348-S. “It begins with keeping families together and living up to the ideas of this country from when it was first built.”

Now is the time for us to keep the pressure on our elected officials to pass immigration reform. Tuesday’s vigil and Wednesday’s march on Washington will let them know that this is what Americans want.