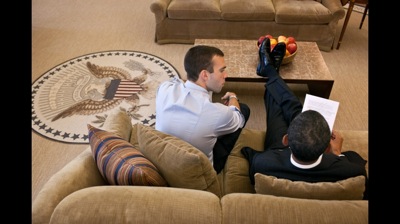 The president prepares his State of the Union speech with Director of Speechwriting Jon Favreau in the Oval Office on January 24.

In the State of the Union address on Tuesday night, President Obama briefly mentioned continuing the immigration debate in the coming year, but the issue clearly took a backseat to other administrative priorities.

Congress should “take on, once and for all, the issue of illegal immigration,“President Barack Obama said Tuesday in remarks prepared for delivery in his State of the Union address.

“I know that debate will be difficult and take time. But tonight, let’s agree to make that effort. And let’s stop expelling talented, responsible young people who can staff our research labs, start new businesses and further enrich this nation,” Obama said in his prepared remarks.

Image courtesy of the White House.