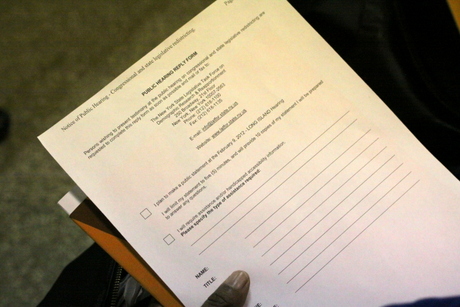 For info on how to submit testimony at the February 9 public hearing on redistricting in Smithtown, click here.

This Thursday is the hearing on redistricting for the state Senate and Assembly. As usual, the redistricting are doing their best to ignore communities of color on Long Island.

Here is an advanced look at the testimony I’ll be submitting tomorrow:

My name is Patrick Young, Esq., and I am the program director of the Central American Refugee Center (CARECEN) at 2000 Brentwood Road, Brentwood, NY 11717.

CARECEN has been a vital part of the Greater Brentwood community since we opened in the heart of Brentwood in 1991. Over the last 22 years, downtown Brentwood has become a center of civic life for the thousands of Central American immigrants and their families who live in Brentwood, Central Islip, and North Bayshore. People from these three villages worship together, shop together, and recreate together. But they are not allowed to vote together.

Current and proposed district lines crack this community in a way that devalues the struggles and achievements of Central Americans who made the long journey from being refugees to becoming voting citizens. Greater Brentwood’s naturalized citizens see their influence in Albany as nothing more than a pale reflection of their economic, cultural, and civic contribution to the state.

The already large Latino immigrant population of the area was ignored when district lines were drawn in 2002, we must not repeat the same mistake again regarding this now even larger community.

Creating Assembly and Senate districts centered in Brentwood and encompassing neighboring areas would finally recognize that our newest citizens are as entitled to the same degree of representation as those Long Islanders who can trace their heritage back hundreds of years here.