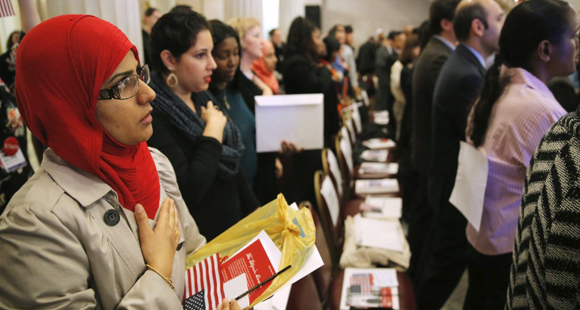 Refugees coming to the United States fully integrate into the communities they resettle in. After a period of ten years or more, they are in many regards similar to their U.S.-born neighbors: They actively participate in the labor force, own their own businesses, buy homes, speak fluent English and become U.S. citizens.

A new report released last week by the Center for American Progress (CAP)explains just that. It also explains that refugees come to the U.S. for humanitarian reasons from the most dangerous places in the world, but over time they contribute to the American economy, bringing vitality to areas with declining populations and expanding the labor force as they seek and find work to make better lives for themselves and their children, the report said.

The following are among the report’s major findings:

Refugee women become increasingly integrated into the labor force over time: Recently arrived refugee women have lower-than-average labor force participation rates, but those who have been in the United States for more than 10 years have rates about as high as or sometimes higher than those of U.S.-born women.

Refugees learn English over time: After living in the country for more than 10 years, 86 percent of the refugees interviewed said they speak English at least “well,” and 61 percent speak English “very well” or exclusively.

Refugees become U.S. citizens: Among the people in each of the four refugee groups, more than three-quarters who have been in the United States for more than 20 years have become naturalized citizens.

Refugee groups are playing a particularly big role in certain states and metropolitan areas: They have become part of the economic revitalization of Minneapolis and St. Paul, Minnesota. They are also helping spur growth in St. Louis; Fargo, North Dakota; and Columbus, Ohio, where political leaders have welcomed their contributions.

The report is based on a 2014 analysis of American Community Survey (ACS), a 5-year data for Somali, Burmese, Hmong, and Bosnian refugees.