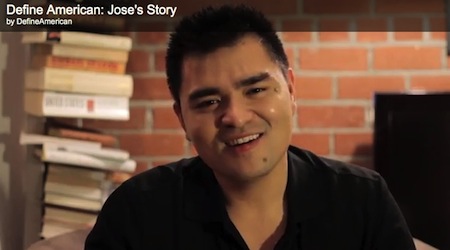 In recent interviews with The New York Times Magazine and ABC News, Pulitzer Prize-winning journalist and Filipino immigrant Jose Antonio Vargas revealed that he is undocumented, and described “living a different kind of reality.”

Vargas came to the US from the Philippines when he was 12-years-old, and realized he was undocumented 14 years ago after he went to the DMV and was told that his green card was fake.

In the New York Times Magazine article, “Outlaw: My Life As an Undocumented Immigrant,” he wrote about living his life under the weight of his immigration status:

Over the past 14 years, I’ve graduated from high school and college and built a career as a journalist, interviewing some of the most famous people in the country. On the surface, I’ve created a good life. I’ve lived the American dream.

But I am still an undocumented immigrant. And that means living a different kind of reality. It means going about my day in fear of being found out. It means rarely trusting people, even those closest to me, with who I really am. It means keeping my family photos in a shoebox rather than displaying them on shelves in my home, so friends don’t ask about them. It means reluctantly, even painfully, doing things I know are wrong and unlawful. And it has meant relying on a sort of 21st-century underground railroad of supporters, people who took an interest in my future and took risks for me.

Vargas is also part of Define American, a newly launched campaign to open a dialogue on immigration.