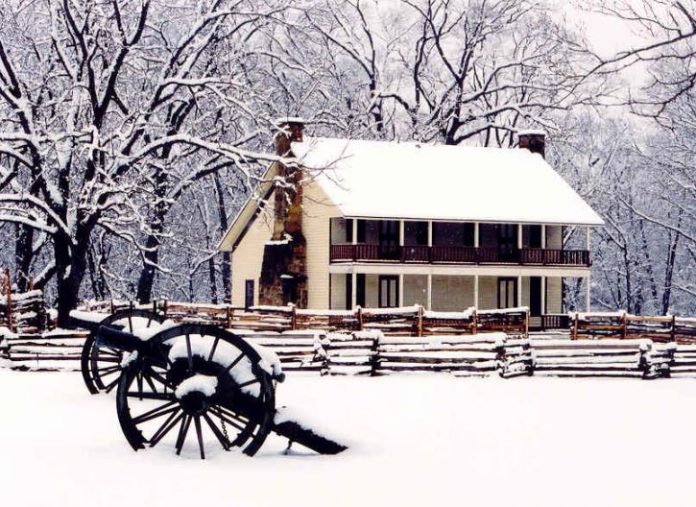 Confederate troops were exhausted after the first day of heavy fighting in the March 1862 Pea Ridge campaign. They had fought against a small Union rearguard under German Major General Franz Sigel. While their losses were insignificant, the Southern troops had marched so far and so hard trying to encircle their enemy that they were breaking down. Their failure to capture the badly outnumbered Germans was not encouraging. The Confederates’ misery was compounded by the decision of their commander, Earl Van Dorn, to speed his troops off to fight without supplies. A Confederate wrote, “such a worn-out set of men I never saw….They had not one single mouthful of food to eat.” Tired though they were from battle, Van Dorn ordered them to march through the night.1

After escaping the Confederates near Bentonville, Arkansas, Sigel’s force rejoined the Union Army of the Southwest holding a strong position along a ridge north of Van Dorn and behind Little Sugar Creek. Van Dorn mistakenly believed the Union army was weak and in retreat. While the Unionists were outnumbered, they were resolved to fight. The Union commander, General Samuel Curtis had determined that despite his men being outnumbered, the Confederates were not as strong as their numbers might have indicated.2

After midnight on March 7, 1862, Union pickets heard Confederate troops marching through the night around the Union flank. While Curtis thought this was likely just a scouting party, in reality it was half of the Confederate army moving around him to attack from the rear. Van Dorn moved nearly his entire army past the Unionists to cut them off from support in Unionist Missouri. He was also cutting off his own army from help and supplies in Confederate Arkansas!3

Confederate soldiers, exhausted from not having had any rest in more than two days, were ordered by Van Dorn to stumble for miles in the night though the frontier countryside in freezing temperatures and without food. They were to then launch a dawn attack on the well-led Union army. One-third of the Confederates fell out along the way and did not reach the battlefield in time for the attack.4

As day broke on the morning of March 7, the lead elements of the Confederate army had passed successfully around the Unionists. Curtis’s men were facing south, but the Confederates were now approaching them from the north. Van Dorn divided his army in two. One part, made up of pro-Southern Missourians, was commanded by General Stirling Price and would take an easterly route towards a rural tavern adorned with elk horns. A second force of Texans, Arkansans, and Louisianans,  led by former Texas Ranger Ben McCulloch, marched towards a small settlement called Leetown. The two Confederate forces would essentially function as separate armies fighting separate battles for the next 24 hours.5

Early on the morning of March 7, Union soldiers spotted Confederate troops at their rear. General Curtis ordered the German-born General Peter Osterhaus to move his mostly immigrant division northwards to find out what was going on. Soon, two generals would be dead and the main Battle of Pea Ridge would begin.6

Yankee Warhorse: Mary B. Townsend on her new… by tvnportal

The National Park Service website for the Pea Ridge Battlefield offers maps, photos, and descriptions of the battle.

The Official Records of the War treats the Pea Ridge Campaign in Series 1 Vol. 8 Part 1

The standard modern book on the battle is Earl Hess and William Shea’s Pea Ridge: Civil War Campaign in the West. University of North Carolina Press, 1992. This article relies substantially on this book