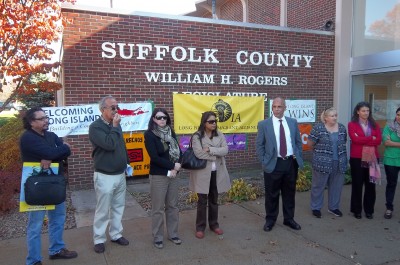 Here are my remarks from today’s Rally for a Hate Free Suffolk.

Three years ago today we found out that there had been a killing in Patchogue. At about six o’clock at night on Nov. 9, 2008 the announcement came out. We have to think about where we were then, with the County Executive and all but three legislators against us, and where we are now.

We built strength through a process.

Luis Valenzuela was at a vigil a few days after the killing that was held in Patchogue to “heal our wounds”. We were supposed to close up all our wounds so that Marcelo Lucero’s death would be done with in fifty to sixty hours and then Suffolk could go back to the way it was before the killing. Luis turned around to the powerful people on the stage with him and said “This isn’t finished. There are people on this stage who have a share of the responsibility for what happened to Marcelo.” And all of our groups in the Long Island Immigrant Alliance supported that, even though we knew it would be a costly decision to make.

It would have been much easier for our group to do what some other groups have done elsewhere in the country, which is to accept token reforms, have politicians say a few nice words about immigrants, and then the conflict is over.

We didn’t go that route. We decided to fight it, and we fought it right up til the debate last Thursday at which both candidates expressed just how shocked they were at Suffolk’s treatment of hate crimes against immigrants and of immigrants generally.

That didn’t happen on its own.

Proessor Muz Chisti at NYU Law School, who is one of the country’s leading scholars on immigration, said in the spring that what happened in Suffolk County over the last three years is an example for endangered immigrant communities in every part of the United States.

We are not just immigrants and immigrant advocates. We mobilized a wide variety of groups from labor unions to houses of worship. We found strength because you in our alliance have been so courageous and relentless.

All of you remember how we were treated in the first days after Marcelo’s killing. We’re not treated like that anymore.

The immigrant community and communities of color are taken much more seriously than they ever have been in the past, and that is irreversible.