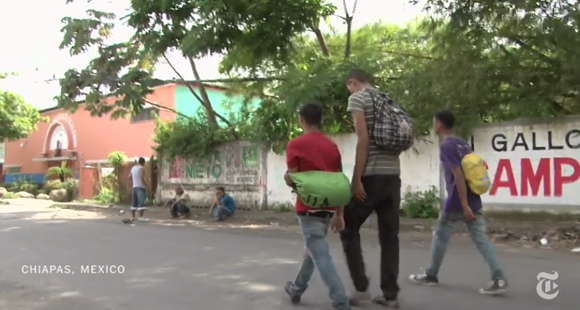 A documentary by The New York Times released this week exposes the harsh reality that immigrant children from Central America face daily trying to make their way to the United States.

As Long Island Wins has reported on various occasions, the main reason why these Central American refugees are coming to the United States is the horrific violence occurring in El Salvador, Guatemala and Honduras.

Just today, the IML (Legal Medicine Institute) in El Salvador reported that violence has increased 72 percent during the first nine months of 2015.

About 4,942 homicides, including 523 children, occurred in El Salvador from January to September, compared to 2,870 murders in 2014, said IML’s director Miguel Fortin to the media.

The documentary “Between Borders: American Migrant Crisis,” by reporters Brend Renaud and Craig Renaud, tells the stories of some immigrant teenagers from Honduras and Guatemala, as they try to avoid being detained by Mexican immigration officials throughout their journey.

It is a combination of causes that occur simultaneously, high levels of poverty, lack of education and employment opportunities, lack of protection and the disintegration of family,” said José Guadalupe, director of Casa Alianza in Honduras, who was interviewed in the documentary. “But it can’t be denied that is violence is the main motivation for the majority of the children who travel to the United States,” Guadalupe said.

Moreover, Central American refugees and their journeys are not unlike that of the Syrian refugees. Families from Central America are fleeing horrific violence in their home countries. They too are risking a death defying and traumatic journey, not across a treacherous sea, but across unforgiving desert lands to reach a safer, freer way of life. It is our moral imperative to respond with welcome and compassion and use these moments to create opportunity for all Americans.