Throughout the history of the United States, public officials have used the rule of law to deny equal opportunities to African Americans. Only recently, in the 20th and 21st centuries, have laws been passed that grant equal rights to all persons regardless of race. Unfortunately, advances in racial equality, such as those brought about by the civil rights movement of the 1960s, have not been enough to erase decades of exploitation and discrimination. More public policies that help to create racial equity are needed to assure true equal access to opportunities, such as quality public schools and economically viable neighborhoods. But what happens if those with power and influence view the degradation of African Americans as a positive political move? It’s scary to think about, but the Republican primaries have provided a frightening example of seemingly acceptable racist rhetoric.

A recent New York Times column by Charles M. Blow skillfully called attention to the anti-black rhetoric that has been embraced by most of the Republican presidential candidates. Their comments about “the African American community” or “black people” in general have been so negative (and absurd) that one has to wonder whether they believe that racist rhetoric makes for good politics. “I’m prepared, if the NAACP invites me, I’ll go to their convention and talk about why the African-American community should demand paychecks and not be satisfied with food stamps,” Newt Gingrich proclaimed. Employing the same negative stereotype, Rick Santorum assured his supporters that he doesn’t want, “to make black people’s lives better by giving them somebody else’s money. I want to give them the opportunity to go out and earn the money.” Mr. Blow does a great job of refuting the fallacy that African Americans prefer to rely on government aid than to work. He points out that a majority of all food stamp recipients are actually white (even though the rate of participation is higher among blacks), a majority are under the age of 18 or are older than 60, and 41 percent live in low-income households with earnings. 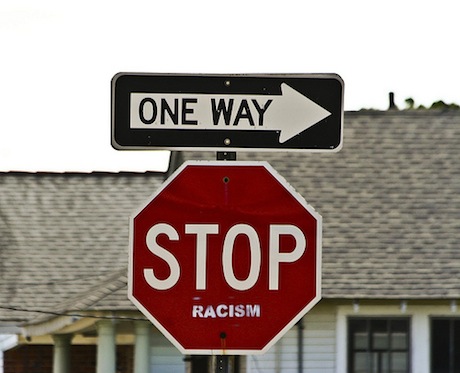 After the recent wave of hate crimes against the Latino community on Long Island, it should be easy to see how racist remarks have real and often dangerous repercussions. How can we assure our black and Latino children that they can set and achieve goals and should strive for academic success when those in the spotlight, and worse, those in power, are characterizing them as lazy and dependent? Not only are such negative stereotypes harmful, but they are wrong. Our research, along with nearly all student performance studies, has shown that strong academic motivation and success is not determined by one’s race, but rather the resources that are made available. In other words, if black or Latino students from a failing school are placed in a high achieving school, the chances of their graduating will dramatically increase and the chances of their going to a prestigious university or college will also increase. If you have your doubts, then take a look at the personal experiences of two Long Island students, Owen and David, in our documentary A Tale of Two Schools: Race and Education on Long Island.

We should all be conscious of the dangerous effects of negative stereotypes, especially when they have the potential to misinform millions. It is horrific to hear public officials spew racist rhetoric and degrade African Am…