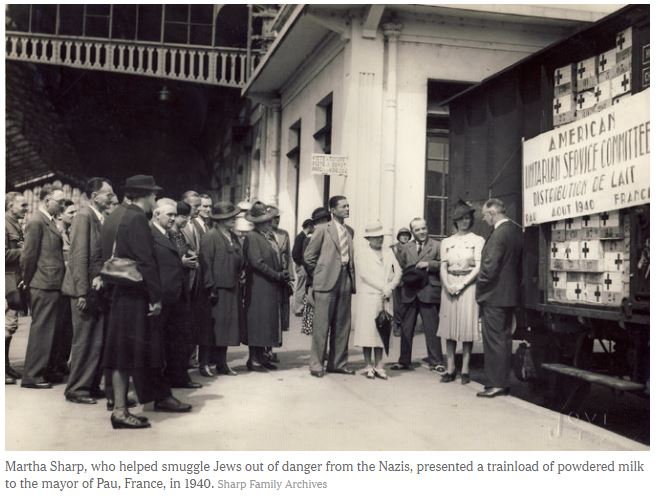 Tuesday, September 20th at 9:00 PM PBS will be premiering a new Ken Burns documentary about a Unitarian couple who risked their lives to protect refugees during World War II. The film, Defying the Nazis: The Sharp’s War, inspired an article by New York Times columnist Nick Kristof. Below are some excerpts from his column:

WHEN representatives from the United States and other countries gathered in Evian, France, in 1938 to discuss the Jewish refugee crisis caused by the Nazis, they exuded sympathy for Jews — and excuses about why they couldn’t admit them. Unto the breach stepped a 33-year-old woman from Massachusetts named Martha Sharp.

With steely nerve, she led one anti-Nazi journalist through police checkpoints in Nazi-occupied Prague to safety by pretending that he was her husband.

Another time, she smuggled prominent Jewish opponents of Naziism, including a leading surgeon and two journalists, by train through Germany, by pretending that they were her household workers.

“If the Gestapo should charge us with assisting the refugees to escape, prison would be a light sentence,” she later wrote in an unpublished memoir. “Torture and death were the usual punishments.”

Sharp was in Europe because the Unitarian Church had asked her and her husband, Waitstill Sharp, a Unitarian minister, if they would assist Jewish refugees. Seventeen others had refused the mission, but the Sharps agreed — and left their two small children behind in Wellesley, Mass.

Their story is told in a timely and powerful new Ken Burns documentary, “Defying the Nazis: The Sharps’ War.” The documentary will air on PBS on Tuesday evening — just as world leaders conclude two days of meetings in New York City about today’s global refugee crisis, an echo of the one in the late 1930s. 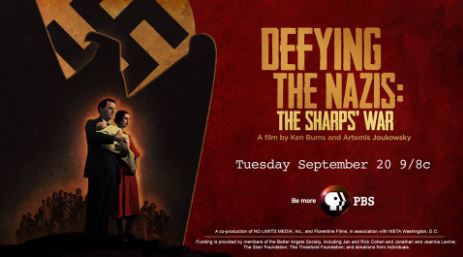 “There are parallels,” notes Artemis Joukowsky, a grandson of the Sharps who conceived of the film and worked on it with Burns. “The vitriol in public speech, the xenophobia, the accusing of Muslims of all of our problems — these are similar to the anti-Semitism of the 1930s and ’40s.”

The Sharps’ story is a reminder that in the last great refugee crisis, in the 1930s and ’40s, the United States denied visas to most Jews. We feared the economic burden and worried that their ranks might include spies. It was the Nazis who committed genocide, but the U.S. and other countries also bear moral responsibility for refusing to help desperate people.

That’s a thought world leaders should reflect on as they gather in New York to discuss today’s refugee crisis — and they might find inspiration from those like the Sharps who saw the humanity in refugees and are today honored because of it.

Take Poland, where some Poles responded to Nazi occupation by murdering Jews, while the Polish resistance (including, I’m proud to say, my father’s family) fought back and tried to wake the world’s conscience. One Pole, Witold Pilecki, sneaked into Auschwitz to gather intelligence and alert the world to what was happening.

Likewise, a Polish farmer named Jozef Ulma and his wife, Wiktoria, sheltered desperate members of two Jewish families in their house. The Ulmas had six small children and every reason to be cautious, but they instead showed compassion.

Someone reported them, and the Gestapo raided the Ulmas’ farmhouse. The Nazis first shot the Jews dead, and then took retribution by executing not just Jozef and Wiktoria (who was seven months pregnant) but also all their children. The entire family was massacred.

Another great hero was Aristides de Sousa Mendes, a Portuguese consul general in France as the war began.

Portugal issued strict instructions to its diplomats to reject most visa requests from Jews, but Sousa Mendes violated those orders. “I would rather stand with God and against man,” he said, “than with man and against God.”

By some estimates, he issued visas for 30,000 refugees.

Furious at the insubordination, Portugal’s dictator recalled Sousa Mendes and put him on trial for violating orders. Sousa Mendes was convicted and his entire family was blacklisted, so almost all his children were forced to emigrate. Sousa Mendes survived by eating at soup kitchens and selling family furniture; he died in 1954 in poverty, debt and disgrace.

“The family was destroyed,” notes Olivia Mattis, president of a foundation set up in 2010 to honor Sousa Mendes, who saved her father’s family.

As today’s leaders gather for their summit sessions, they should remember that history eventually sides with those who help refugees, not with those who vilify them.

Currently, only a small number of leaders have shown real moral courage on refugees — hurray for Angela Merkel and Justin Trudeau — and even President Obama’s modest willingness to accept 10,000 Syrians has led him to be denounced by Donald Trump.

Without greater political will, this week’s meetings may be remembered as no better than the 1938 Evian Conference, and history will be unforgiving.

“We must think of Sousa Mendes’s heroism in today’s context,” Jorge Helft, a Holocaust survivor who as a French boy received one of Sousa Mendes’s visas, told me. “I have dinners in Paris where people start saying we have to kick all these people out, there are dangerous people among them.” He paused and added, “I remember being on a ship to New York and hearing that some Americans didn’t want to let us in because there were Nazi spies among us.

“Yes, there might have been Nazi spies, but a tiny minority,” he said, just as there might be spies among Syrian refugees today, but again a tiny minority. “Ninety-five percent or more of these people are decent, and they are fleeing from death. So let’s not forget them.”