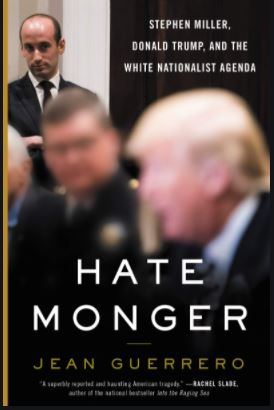 Hatemonger: Stephen Miller, Donald Trump, and the White Nationalist Agenda by Jean Guerrero is a detailed look at the rise and growing power of Steve Miller, the country’s second most important person in the current campaign against immigrants by the Federal government.  The book depicts a relatively young man who has always set himself off from the communities he lived in and the ordinary people around him. A lack of empathy for others and a seeming inability to feel compassion.

I normally don’t give much credence to biographies that trace a grown man’s current horrors to his childhood and adolescence, but the book makes a convincing case that Miller’s penchant for separating, rather than uniting, dates back to his earliest days. Jean Guerrero writes:

In Stephen’s third-grade class picture at Franklin Elementary School, he looks dazed and disheveled. Most of the other children are smiling and groomed. Later, his third-grade teacher, Nikki Fiske, would say he “was off by himself all the time.” His desk was a mess, with “stuff mashed up,” and he would pour glue on his body, then peel it off and eat it. Fiske compared him to the Peanuts comic character Pig Pen, “with the dust cloud and crumbs flying all around him.” Miller shared a desk with John Muller, a blond-haired boy with large glasses. “Along the midpoint of our desk, Stephen laid down a piece of white masking tape, explaining that it marked the boundary of our sides and that I was not to cross it,” Muller later wrote, puzzled.“ (p. 20)

Miller’s immigrant ancestors seemed to be the opposite of what their scion would become. On his mother’s side, for example, the Glossers were refugees from pogroms in the Tsarist Russian Empire who came to America in the first years of the 20th Century. The family became prosperous retail merchants in Johnstown, Pa where they were remembered for their generosity to the poor. They were particularly well-known for their support of charities for impoverished newly-arrived immigrants.

Stephen Miller’s demand for privileged treatment in high school has been well-documented. He told students that they should not clean up after themselves after eating lunch in the cafeteria because that was what the people of color on the custodial staff were getting paid to do. He also got into direct, and extremely racist confrontations with Latino fellow-students. Here is the story of one classmate of Miller’s that Guerrero tells:

Maria Vivanco was MEChA’s president at the school. Stephen told her and her friends to “speak only English” when they crossed paths. The girls spoke a hybrid of English and Spanish, Spanglish. Vivanco usually just laughed, seeing him as “a bizarre and lonely guy, a sad white kid who was disturbed.” But one time she was chatting with her friends when Stephen came up to her and said, “Go back to your country!” Vivanco stared him down. “This is my country!” she replied. Vivanco was born in Santa Monica. (p. 56)

Vivanco remembers Miller would stand over new immigrants at their lunch tables and yell at them in English, a language they did not speak.

In college, Miller only associated with the most right-wing and nationalist people at Duke University. He supported the work of white nationalists like Peter Brimelow, who runs the hate-site VDARE, and the Nazi Richard Spencer. David Horowitz, the far-right’s leading strategist on winning over students, became a mentor to Miller.

Miller found a path to power after graduation with the guidance of Senator Jeff Sessions. The now disgraced Attorney General was at the time the most anti-immigrant person in the United States Senate. Miller would soon surpass Sessions in the virulence of his animosity towards immigrants. The younger man would later throw Sessions to the curb when he was no longer useful.

As a Congressional aide, Miller avidly promoted the writings of white nationalists whom other conservatives viewed with suspicion. He developed a reputation as a “nasty” and “vindictive” legislative infighter who was as likely to attack more moderate Republicans as he was to go after Democrats.

The Miller story over the last four years is well known to the readers of this blog. What Hate Monger adds to the story is the long trajectory of Millers racism and Xenophobia. He did not become a white nationalist in 2016, he brought his adherence to its bigotry to his job in the White House and helped shape American policy in its all-white image.