Nearly 100 Long Islanders boarded two buses from Long Island to Washington to join a rally of over three thousand supporters of DACA. The rally was held outside the Supreme Court while arguments were heard inside on the future of the DACA program.

Buses left from Farmingville, Melville and Westbury at 3:00 AM as temperature were falling from the high fifties to near freezing. In spite of predictions of snow and cold rain, people loaded wearily into the buses and headed out to make Long Island’s presence known in D.C.

The buses were organized by New York Immigration Coalition’s Long Island Manager Ivan Larios. He credits organizations like SEPA, Mujer, the Immigrant Justice Corps, and LIISA for turning out so many people on a weekday. “SEPA Mujer’s Dulce Rojas deserves particular credit for the great work she did in signing people up and cataining the Suffolk bus,” he said.

While the organizers were expecting about a thousand people to attend the rally, more thant 3,000 filled the square outside the Supreme Court. Those there included Nancy Pelosi and more than a dozen members of Congress. Unions like the American Federation of Teachers and National Education Association sent large delegations. Students from Washington-area high schools and colleges swelled the crowd.

A cheer went up when the audience attending the Supreme Court hearing came outside chanting “No hate, No fear. Immigrant are welcome here.” Those at the rally joined in the chant.

The court is deciding whether the Trump administration acted lawfully when it ended the DACA program. Every court that has touched the case has blocked the termination of DACA, but the two new Trump loyalists on the Supreme Court may tip the balance against DREAMers. We will have to wait until 2020 to know how they decide.

One message of those at the rally is that we can’t rely on the Supreme Court to do the right thing. We need to keep pressure on Congress to authorize a pathway to itizenship for the DREAMers and many other undocumented immigrants. Please call your Congressional Representative today and demand that DREAMers be protected. 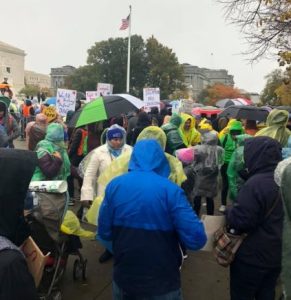