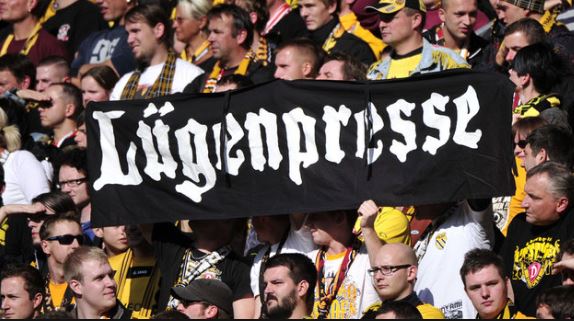 Buzzfeed and the Washington Post report a new insult being hurled at reporters at Alt-Right events. Reporters say that at American campaign rallies Alt-Rightists now yell “Lügenpresse!” at them. The word means “lying press” in German and it was a buzzword of the Nazis in the 1920s and 1930s. In recent years its use has been revived by far-right groups in Germany. Over the last year, the phrase is increasingly used in Alt-Right circles in the U.S.

Richard Spencer, the white nationalist leader who is considered one of the leaders of the alt-right, was able to shed some light on this for me.

“I see ‘lying press’ and ‘Lügenpresse’ all over the place,” Spencer said in an email. “It’s typical Alt Right: serious… ironic… and with a sly reference to boot.”

Spencer said the term had been in use in American alt-right circles for “a year, at the least.”

The website Occidental Dissent, one of the nodes of alt-right online commentary, frequently uses the term, and the #lugenpresse hashtag on Twitter is fairly active and largely used by alt-right Twitter accounts.

The phrase inevitably leads one to the idea that the media is controlled by Jews, an ancient antisemitic trope.