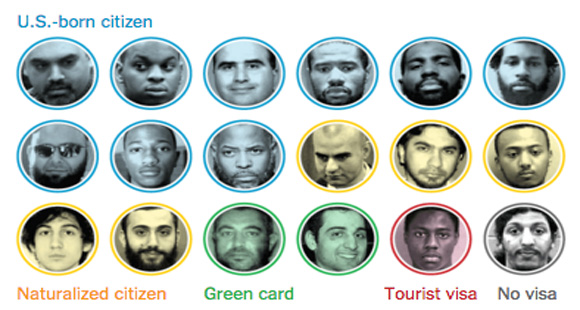 Since 9/11, most attacks in the country were by U.S.-born citizens or naturalized citizens, and none were refugees, according to a story published today in The New York Times.

“Security experts argue that the risks of routine travel and the U.S. visa waiver program, which allows people from other countries to enter the United States without a visa for stays of up to 90 days, are greater than the threat of foreign terrorists coming through the refugee program,” according to the Times.

Story by The New York Times:

The Origins of Jihadist-Inspired Attacks in the U.S.

All of the Sept. 11 attackers entered the United States using tourist, business or student visas. Since then, most of the attackers in the United States claiming or appearing to be motivated by extremist Islam were born in this country or were naturalized citizens. None were refugees.

Half of the attacks since 2001 were committed by men born in the United States.

The paths to violence for the United States-born attackers varied. Some were recent converts to Islam. At least three who were born in the U.S. had previous criminal histories, and onehad a history of mental illness. One seemed to haveradicalized after spending time in Yemen. Another became radicalized after being convicted of lying to F.B.I. agents — denying he had made plans to travel to Somalia when in fact he had.

Security experts argue that the risks of routine travel — including the U.S. visa waiver program, which allows citizens of Britain, France, Belgium and 35 other countries to enter the United States without a visa for stays of up to 90 days — are greater than the threat of foreign terrorists coming through the refugee program.

“Further restricting the acceptance of refugees does not address the most likely vulnerability to attacks from abroad, which is the large number of people from visa-waiver countries involved in the conflict in Syria,” said David Sterman, a researcher for the International Security Program at the New America think tank who has been cataloging terrorist attacks carried out since Sept. 11.

Attacks With the Most Victims

Nidal Malik Hasan, who killed 13 people in a mass shooting at Fort Hood, Tex., in 2009, was born and raised in Virginia. Mr. Hasan had exchanged messages with Anwar al-Awlaki, an American radical cleric who was later killed by a drone strike in Yemen. Despite those exchanges, investigators have not linked Mr. Hasan’s attack to terrorism.

Dzhokhar and Tamerlan Tsarnaev, the brothers responsible for the Boston Marathon bombings in 2013, settled in the United States after their parents were granted political asylum, which involves a less extensive vetting process than the program for Syrian and Iraqi refugees.

At the time of the Boston bombings, which killed three people and injured more than 260, Dzhokhar Tsarnaev was a naturalized American citizen, and Tamerlan had a green card.

Since 2001, “hardly any foreign-born have committed (or tried to commit) terrorism in (or on the way to) the U.S.,” John Mueller, a political scientist at Ohio State and the Cato Institute who tracks terrorism in the United States, wrote in an email.