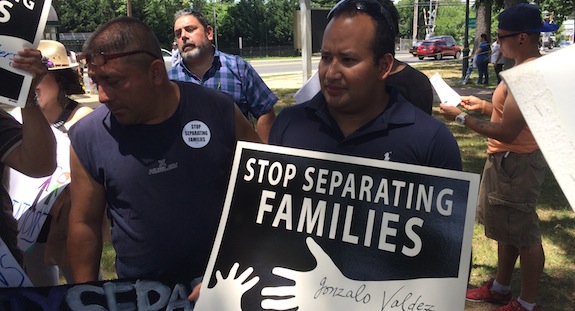 In response to reports today that President Barack Obama will delay administrative relief for immigrant families until after the mid-term elections, Long Island Wins, along with Long Island immigrants and advocates today expressed deep frustration with the President for failing to keep his promise of action this summer.

Maryann Sinclair Slutsky, executive director of Long Island Wins, said, “We are bitterly disappointed that the President is delaying administrative relief for the 11 million people who are victims of our broken immigration system. President Obama gave us false hope on Friday and in less than 24 hours dashed those hopes with his announcement today. This delay will have tragic consequences for our families who will be ripped apart in the coming months. We will continue to fight for justice for our families and hope our nation’s leaders will take action and fix our broken immigration system.”

Javier H. Valdés, co-executive director of Make the Road New York, stated: “President Obama has once again raised and dashed the hopes of immigrant families across the country. This latest delay will result in thousands of deportations and continued pain and fear across our communities. Sadly, these disappointments are no longer surprising, and we will escalate to hold all parties accountable for their lack of action to keep our families together.”

Ana Flores, member of New York Communities for Change, said, “More than ever today we are disappointed by the President’s failure to deliver for millions of immigrant families who work hard to make our communities stronger. Immigrant families like mine will not let this stop us from continuing to organize and push our government to recognize the contributions that immigrant families make to this country and give them the respect and dignity they deserve. If anything, President Obama’s disappointing announcement will inspiring me to work harder for immigrant rights on Long Island.”

Patrick Young, program director of the Central American Refugee Center, said, “President Obama’s failure to act is yet another disappointment from the White House. Politics should not derail the crafting of a fairer immigration policy.”

Robert Socolof, Long Island director of the American Jewish Committee (AJC), said, “AJC will continue to work to fix the broken system of immigration in keeping with the core Jewish values of Welcoming the Stranger and Keeping the Family Together. We know that a reformed system of immigration will strengthen the security of the United States.”