As we reported last week, Long Island Wins joined the Long Island Civic Engagement Table and other Long Island activists in a letter-writing action. As part of the 80% of Long Islanders that support immigration reform with a path to citizenship, each of us created individual letters asking Congressman Peter King to pressure House Speaker John Boehner into taking action in 2014.

“All elected leaders, including Speaker Boehner, have a moral duty to take action to fix our broken immigration system. What we fail to remember in this debate is the human aspect of immigration – that immigration is primarily about human beings. The majority of Long Islanders and the American people support passing immigration reform and protecting hard working families from deportation. The time is now!” said our executive director Maryann Slutsky.

We wanted to share a very heartfelt letter written that night by one of our Long Island DREAMers, Dalia Casco-Amaya, asking for the passage of immigration reform and how it would change many lives. Her letter exemplifies the struggle of living in fear and not having any rights for so many students right here on Long Island. Read her letter below.

My name is Dalia Cosco-Amaya. I am a DREAMer! I came to the United States in 2005. Currently I’m a freshman. I’ve been working very hard that I’ve become an honor student. I believe the immigration reform should be passed! Everyday there will always be undocumented people suffering from being deported and separated from their families. Something needs to be done! People are feeling like they have no rights. They are feeling unequal to other people. Some are holding back and not being active in their communities due to the fear of being deported. Everyone is a human being. Everyone wants to be part of something. Everyone deserves the chance for their hard work to be paid off. This is a country of liberty. Without liberty how can we stand? 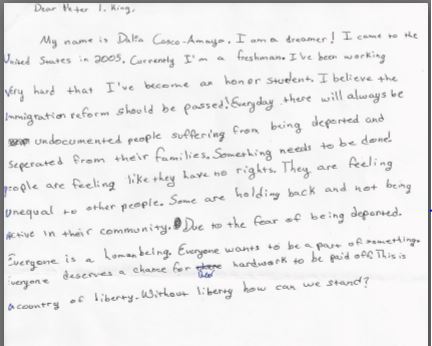